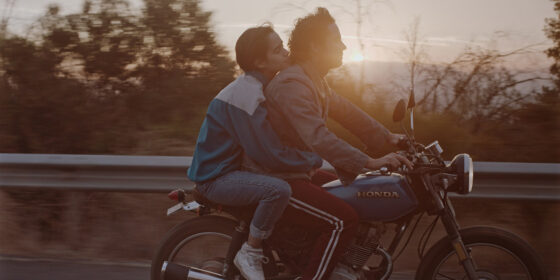 All play and no work is a dangerous game in Too Late to Die Young, the third feature by Chilean filmmaker Dominga Sotomayor, winner of the Golden Leopard for Best Director at this year’s Locarno festival. Recalls the dreamy, pastoral pastels of painter George Seurat, the film is set in 1990 and follows a community of friends and family—painters, musicians, mechanics—living in a forest, their bohemian lifestyle guided by lawless laziness and a desire to intimately kill time together while wilfully forgetting all else. Cinematographer Inti Briones films the group’s activities at a distance through walls and windows, with a painterly sensitivity to the shades of summer. There is an impenetrable beauty, a troublesome purity to this world-within-a-world: even dirty blankets on the floor glow exquisitely beneath soft sunlight.

The centrepiece of Sotomayor’s mosaic is Sofia (Demian Hernández), a girl who wanders through the camp in search of a moral and philosophical compass, disturbed by an inarticulable disenchantment—the lingering hand of Pinochet, ousted only one year prior. The unravelling of old rules only invokes further confusion. A missing dog refuses to come home; a long-awaited parent does not arrive; and, meanwhile, Sofia cannot help but long to leave for the city.

The film’s second half, dedicated to the impending apocalyptic event that is the New Year, replaces the warm blue days of the beginning chapters with a starless black sky lit only by strings of backyard Christmas lights. As night turns to morning, Sotomayor sets the fragility of the commune’s joyful, quaint escapism ablaze with increasing strands of violence. But only when everything falls apart does the camera begin to move freely, gliding deeper into the forest as we witness the destruction of yet another structure: the beginning of a new order.