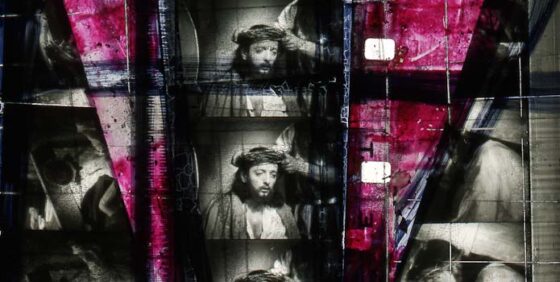 Although the first Wavelengths shorts programme, Under a Pacific Sun, certainly gives it a run for its (non-existent) money, this second collection of experimental films is probably the tightest of the four this year. This is due in no small part to Wavelengths curator/Cinema Scope contributor/international superstar/Canadian national treasure Andréa Picard’s bold and inspired decision to begin the show not only in dead silence, but without a lick of cinematic movement. Documenta kicked off with a remarkable selection of 35mm slides by filmmaker Luther Price, essentially photographic collage works based on the same materials with which he constructs his various found-footage film series. We see images of B-movie Jesuses from his Sorry films, anxious or disoriented seniors familiar from the Biscotts films, and the occasional, obscure clip from gay porn, all arranged in strips, hole-punches, or in some cases, black maze-like grids with broken walls. Price’s photographs, then, operate very much in the same realm as his film works: recombinant, obsessive workings-over of particular ideas and motifs. But the slides join the films by considering these same ideas in an almost painterly dimension. Given the coagulation of bracing representational imagery within dank coloured fields, Price’s slide work recalls a nastier, more forthright and less gimmicky version of Gilbert & George’s late panels. They offer much intrigue, and the AGO Jackman Hall projection team deserves kudos for their stellar presentation. 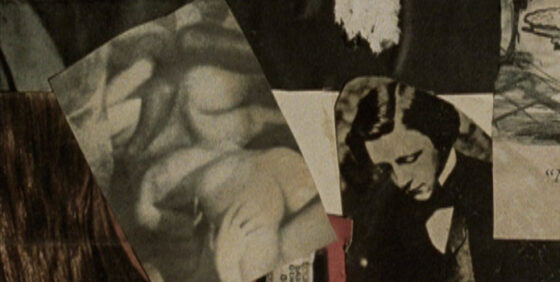 Phantoms of a Libertine

The slides were a hard act to top, but indeed, more than the Price was right. As much as I’d love to address each film in the programme, space does not permit it, and I have already dealt with them all elsewhere. So let me think thematically for a moment, on how the exquisite silence of the Price slides set the stage for some unexpected explorations in sound. The new Ben Rivers, Phantoms of a Libertine, proved to be one of his rawest, most experimental films to date, combining photos from a late friend (both private and professional) with a roll of film that had a forgotten soundtrack already on it. When the image changes, there’s a sharp thump; when the screen goes black, brief chords of the rather shrill original music stab through. The impact is disconcerting, and shares this quality with both the Luther Price 16mm film on the docket and the film work presented by videomaker Jean-Paul Kelly. Price’s Sorry Horns presents scratchy fields of black-on-white skein—a gritty visual datum poised between the recent abstract canvases of Brice Marden on the one hand, and a rampant fungus infecting the film strip on the other. As counterpoint to this non-representational material, Price offers found footage of “Roman soldiers” blowing long horns in heraldry, presumably announcing the coming of an emperor. The horns loop, switch places, and a voiceover insistently gives us a cryptic, conspiratorial half-message about Jesus. 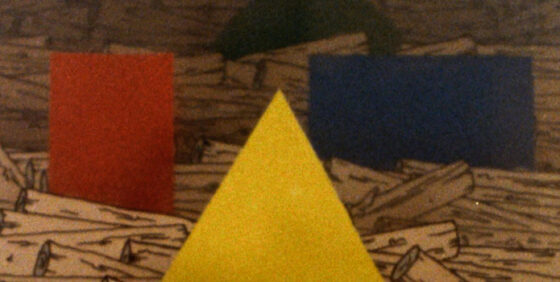 By contrast, Kelly’s A Minimal Difference uses multi-planar settings (which may have also employed glass slides—pretty canny, that Ms. Picard!), staged in depth, to organize shallow stage settings of post-earthquake garbage pileups, shantytowns, massive stacks of wood, and other “uncivilized” clutter. (The style of Kelly’s drawings very much resembles that of Philip Guston.) Into these problematic environments, he inserts a square, circle, rectangle, and triangle. They assert themselves with synthesizer tones; they crash the “party” of the semi-organic. As with the works by Rivers and Price, Kelly’s film treats sound as a means of phenomenological disruption, a shock that practically causes vision to temporarily “go out.” (Rivers’ film, of course, literalizes this effect by going dark.) If what we typically think of as “cinema” coaches us to overwhelmingly absorb its meanings visually, with sound as mere support, then the power of the sonic blast is certainly one of the key fields for intellectual experimentation. In fact, few films exemplify this better than a certain 1967 Michael Snow work, whose slow visual creep is married to an at-times unbearable squeeze in the upper registers of sound. Say! Someone should name a screening series after a film like that.