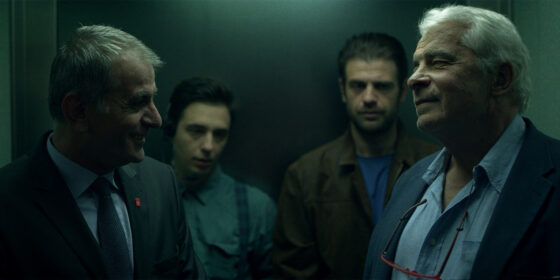 In Death in Sarajevo, Danis Tanović directs his camera towards his homeland and its tragic history, still torn between a traumatic past and a fragile present. Although the story is loosely inspired by Bernard-Henri Lévy’s theatrical piece Hotel Europa, Tanović incurs deeper debts to another artist, as his multiplicity of overlapping themes and long-take style distinctly recall Robert Altman’s Short Cuts (1993). The setting here is purely metaphorical: a grand hotel standing in as a representation of contemporary Bosnia, with characters on the roof asking lofty questions about history as they prepare for a centennial commemoration of the First World War, while at ground level the local mafia busies itself with gambling and prostitution, the invisible hand holding the whole structure together. Between these two worlds, ordinary people with ordinary problems are trying to survive while being squeezed between two competing systems of power. Here, communication does not exist; solidarity is gone; nobody listens to one another. With equal doses of malice and irony, Tanović sketches a portrait of a nation that puts more effort into polishing cutlery memorializing Kirk Douglas than catalyzing social change. It’s a bleak, ominous diagnosis that can be extended to the whole of modern Europe, and one for which Tanović is entirely unapologetic. This tragicomedy asks how many times a continent can die and not draw any new conclusions from the experience.