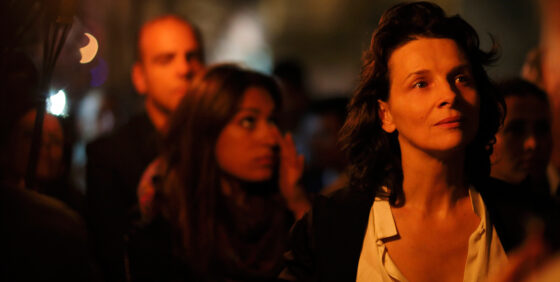 A despairing mother, Anna (Juliette Binoche), mourns the death of her beloved son, Giuseppe; a Sicilian community is drowning in a black haze of grief and sorrow. But suddenly the beautiful Jeanne (Lou de Laâge), Giuseppe’s French ex-girlfriend, arrives in the countryside. She doesn’t know about the tragedy and wants to meet Giuseppe, as she was supposed to. Anna was unaware of the girl’s existence. She doesn’t tell her the truth, and asks her to wait a couple of days. A strange game begins between the women, as they start to know each other, but only under the pretense of a lie. In this way, Anna manages to keep her son alive, but how far can she possibly go?

In his feature debut, Messina (who worked on Sorrentino’s The Great Beauty) dramatizes the struggles to survive two different but interconnected traumas: the death of a child and the loss of a lover. In both cases, the survivor would turn back time to embrace the past, even if only for a second. Anna and Jeanne are on the same wavelength, so the difference lies in the performances of the actresses playing them. It’s hard to be surprised at this point by Juliette Binoche’s over-the-top work; this experienced actress has become repetitive. So the most pleasant and captivating element of the film is the less well-known de Laâge. She effortlessly seduces the viewer with her confident body language: it’s a convincing interpretation of an emotionally confused young girl discovering the power to strike back against somebody who has lied to her.

Besides the unevenness of the performances, The Wait has two major flaws. One is the unrealistic starting point of the story: you don’t need to be Rust Cohle (or even Frank Velcoro) to realize that something is wrong when your beloved doesn’t answer the phone and his mother behaves oddly every time you bring him up. The “waiting game” can’t be stretched indefinitely, and the scenes get less juicy as the film goes along. And then there’s the matter of style: Messina insistently employs visual metaphors and ornamental camera movements (à la Sorrentino and his cinematographer Luca Bigazzi) in ways that do not heighten the drama of the story, but reveal its emptiness. This is an elegantly made movie with nothing underneath its immaculate surface. If Messina aspires to the soullessness of Sorrentino, he’s achieved his goal.