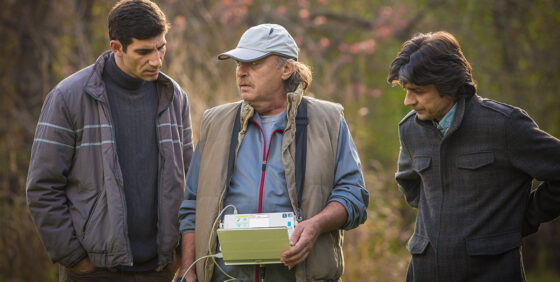 Digging for History: Corneliu Porumboiu on The Treasure

Corneliu Porumboiu has always been the joker of the Romanian New Wave, as well as its most consistent and formally rigorous director. Employing the slow pace, long takes, and non-professional actors that have become the calling card of the movement, he slyly probes the cracks in Romanian society through deceptively simple stories of average people pitted against mundane but strangely insurmountable obstacles. Porumboiu doesn’t exaggerate, he just observes, and that is enough to discover the farcical elements in everyday life.

Porumboiu’s new film The Treasure focuses on Costi (Cuzin Toma), a husband and father who holds down a dull day job. One day, his recently unemployed neighbour Adrian (Adrian Purcarescu) asks to borrow 800 euros. Costi insists that he’s just making ends meet himself and is unable to help, but his interest is piqued when Adrian reveals that he needs the money to pay for a metal detector. Adrian explains that his grandfather had buried a treasure prior to the Soviet takeover in the ’40s, and that the loot still lies buried somewhere in the garden of his family’s house.

Intrigued by the far-fetched story, and with his dormant spirit of adventure stirred (Porumboiu shows him reading his son Robin Hood stories at bedtime, the illustrated derring-do filling the frame in close-up), Costi scrapes the dough together, bails from work for the day, and joins Adrian at the old homestead. They are soon joined by their metal-detector hookup Cornel (Corneliu Cozmei), a corpulent fellow who, disconcertingly, seems less acquainted with the workings of the device than one would have hoped. Attaching a computer to the detector and scanning the garden, Cornel soon reveals that he barely knows how to read the data, and the detector is so sensitive to any trace of metal in the ground that it goes off almost constantly. Still, the men persist, hoping against hope that one of the innumerable, incessant electronic bleeps (which take over the soundtrack for a solid third of the film) will be the promised fortune.

For at least a third of the film Porumboiu immerses the viewer in this dogged and desperate search, which is at once an exercise in excruciating suspense and one long, masterful gag. And as the night closes in on the men while they continue to fruitlessly dig in the garden, their labours illuminated by a single light bulb, it becomes something else as well: an inadvertent journey back into Romania’s history, a search for the nameless treasure buried beneath decades of disappointment, dictatorship, and war.

Cinema Scope: The Treasure was initially conceived as a documentary. How did the project begin and how did it evolve into a fictional film?

Corneliu Porumboiu: Adrian Purcarescu is a friend, and he had told me this story that his great grandfather had buried treasure in his family home’s garden before the Communists took power in 1945. We decided to search for the treasure, so I gathered a small team. I called someone in my hometown who I knew had metal detectors, and he sent Corneliu Comei, who would end up in the final film. Unfortunately, we didn’t find anything. I was looking at the footage we shot and I had this strange feeling that we were lost in that garden, that it became this dark hole. In the beginning, the documentary was quite funny because Corneliu really screwed around with the machines and didn’t really know how they worked, so we were laughing—but after that, step by step, it grew sadder.

Scope: So both the comic and dramatic elements emerged from the actual experience?

Porumboiu: Yes, and I realized I had to create a fiction film based on this, with the same characters. So I built the film from this angle.

Scope: You spoke about your experience in the garden. Could you also describe the significance of the house?

Porumboiu: It was my first time there, and Adrian started to tell me the story of the house. His family lived there in 1945, but in 1947 the state took it away. Over the years it was a kindergarten, a pharmacy—after the revolution there were legislative problems and a lot of people didn’t get back their old properties—and it was also a strip club and a bar. I started to think about this history of this house.

Scope: The film takes place in the present but it reaches deep into Romania’s past. The treasure they’re looking for is from 70 years ago, and their search feels like a search through generations, a lineage, a heritage, and the garden becomes a metaphor for a relationship with their nation’s fractured history.

Porumboiu: When I was making the documentary, I said OK, if we find the treasure, we could make a sort of loop in history from before and after Communism. Adrian could find something from his family, and it would close this circle. But we didn’t find anything. When I made the film I wanted to have this sense of absurdity in the history. The characters speak about two revolutions, in the 1800s and the 1900s. I think Romania’s past is very fragmented. So they find something German, something absurd, completely outside of that circle, outside of their conception of the history of that place.

Scope: Costi is a fairly average family man with a normal life. Why did you choose him as your protagonist?

Porumboiu: He’s got a normal life, but in a way he’s imprisoned: you can tell he’s not happy with his work. He’s got a job, but he’s in debt. Like most people these days, he has a fragile equilibrium. Adrian is financially desperate for the treasure, but for Costi it’s not a necessity, it’s more about a personal freedom.

Porumboiu: Yes, it’s connected to the Robin Hood story that he’s reading to his son, to being a hero. At the same time he makes compromises at his job, with his boss. I wanted to keep it like that: for Adrian it’s about money, but for Costi it’s about something deeper.

Scope: Has fatherhood influenced your films?

Porumboiu: I have two daughters, and I’m used to reading the older one stories. I think it’s something cultural: children have a special role in Romania. Each generation is disappointed by the previous, and we believe that in the future our children will do better than us. In The Second Game (2014), I didn’t think too much about my relationship with my father. Now that I have kids I think about it. And I spend a lot of time in parks. In fact, my daughters are in the film in one scene at the park.

Scope: Finding the treasure is the centrepiece of the film. The first half suspensefully builds up to it, and the second half is about dealing with the consequences. Why did you choose this structure?

Porumboiu: In a way it was like that from the first draft; I didn’t plan it. Usually in movies finding the treasure is either the first or the last plot point. I think most of my films are made in a two-part structure—even the football film, but not Police, Adjective (2009). I wanted The Treasure to have this sense of movement, to naturally flow from beginning to end.

Scope: The sense of ownership and property and the tensions that revolve around them play an interesting role in the film.

Porumboiu: It was one of the first things I thought of when making the documentary and thinking about the house, and who it had belonged to, and what it went through under Communism. It is kind of like the opposite of a western. You don’t have new land—you have to commandeer the same land for new purposes. Thinking about property, what do we have in the end? The society doesn’t have an historical structure. The links to possession and the need for possession are confusing.

Scope: Can you talk about the pacing of your films and how you undermine dramatic conventions? Other contemporary Romanian directors have a comparable approach, but for them it is to develop a serious realism, for you it is about enabling a dry humour and bringing out absurdities.

Porumboiu: Comedy for me is instinctual. It comes naturally. I like to play with expectations in how the story develops. In this film I switch genres from western to suspense, and the cliché would be to have these characters killing each other or something like that. So I like to take it into a different direction.

Scope: This is the first film you’ve shot digitally. Was it a formal decision?

Porumboiu: It was. I tested 35mm, and I chose digital mainly because I had problems with how the garden looked either in the daylight or nighttime on Kodak. There wasn’t enough green—Kodak emphasizes red, so you have to take a lot of red out the image to make it work. Normally you could use Fuji for exteriors, but now you can’t as there’s no more Fuji. The way that we shot the night exteriors in the garden with just that single light that the characters are using to help them dig worked really well when we shot it digitally, also with just the headlights of the car. The digital gave us more details, which was especially important with the look of the garden and the house. I really liked how it looked, but also I think you have to be more precise when using digital for lighting and colours. I used a very precise palette for this film, a lot of light blues.

Scope: The metal detector, which beeps for like a third of the film, made me laugh every time it goes off. It’s so absurdly hilarious for some reason. Also, just seeing Cornel move along the way he does in wide shot, with that cigarette in his mouth, in one sense clumsily, in another precisely, is so funny. It reminded me of Jacques Tati.

Porumboiu: I love Play Time (1967). However, I think my movies have inherited something from Buster Keaton. All of my characters are always very serious and appear stoic, and this may be where the absurdity in my film arises. Because they look so serious, the situations they find themselves in become quite funny in contrast. It’s also a personal therapy for me because I myself jump from absurdity to seriousness. My characters never smile, and I think this is a good ingredient for comedy: to never smile, like Buster Keaton. The world is always falling apart around Keaton, and I think it’s similar with my characters, in a way. With Cornel, it was an issue, because I liked him so much. At first, I tried to cast a professional actor for his role, and in auditions I showed them his body language, but no one could capture it the way I wanted. With Cornel, the detector is like this natural extension of his body. The way he moves with it has this ballet-like quality, it’s so graceful, and the sound of the detector is absurd but also mysterious. I really loved it so I cast him. His body language is so interesting.

Scope: What about casting Costi?

Porumboiu: Cuzin Toma was the only one in the auditions that made sense. He was a miner, and seems so tough, like he has had a difficult past, like Romania itself. He has this strength and determination in his face. His real life story helped me develop the character. There’s that scene where he discovers his son was beaten, and I love how he plays it so tenderly. He also has a mysterious quality, and it helped shape the film.

Global Discoveries on DVD | Then and Now, Hither and Yon TIFF 2015 | Embrace of the Serpent (Ciro Guerra, Colombia/Venezuela/Argentina)—Contemporary World Cinema