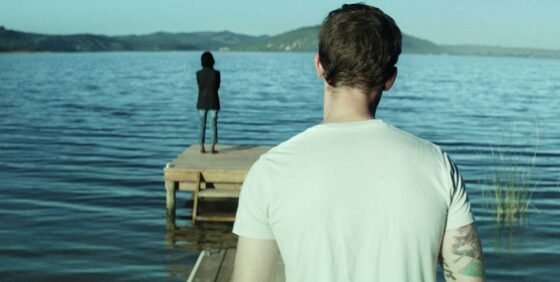 After the radical, frigid and well-received Beauty (2011), young director Oliver Hermanus creates another study of obsession, this time about the fine line between victimhood and blame in the midst of a vendetta. Once again set in present-day South Africa, where racial tensions have hardly receded since the time of apartheid, The Endless River unfolds in three chapters, each of which is assigned to one of the major characters: Gilles (Nicolas Duvauchelle), Percie (Clayton Evertson), and Tiny (Crystal-Donna Roberts). After four years served in jail for robbery, gang-banger Percie returns home to his wife Tiny and promises that he’ll change. Meanwhile, Frenchman Gilles lives on an idyllic farm with his wife and children, and we wait around to see how his story will intersect with Percie’s. It seems that there will be blood.

It is hard to be indifferent to the symphony of violence to which Hermanus subjects us near the beginning of The Endless River; the crucial scene is built with a disturbing rhythm and harmony reminiscent of Michael Haneke’s Funny Games (1997). Hermanus specializes in a cinema of suspicious confrontations and psychological abuse; he uses the violence of his story to analyze the mutual paranoia and socially dictated inequalities of South Africa’s post-apartheid era. Through the tragic turns of his story, Hermanus observes a morally backward society where justice is still sought according to the idea of an “eye for an eye” and where the law of the strongest prevails.

The problem with The Endless River is not its set-up, but what happens in its final chapter, which belongs to Tiny. The idea of contriving a sort of ostensible happy ending for a tortured character smacks of Fassbinder in its reversing and revising of classic melodramatic conventions. But while the idea of hope rising from the ashes of tragedy might work on paper, in practice it undermines the severity of what has come before. The shift in mood suggests a film that is finally, for all its sinister power, quite naïve.

Tagged with → Canada
Implications of a Totality: Frames for the Films of Joseph Bernard TIFF 2015 | Trumbo (Jay Roach, US)—Special Presentations