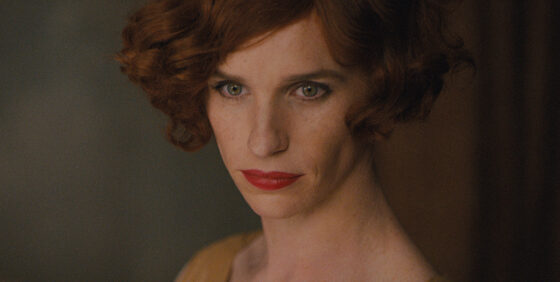 Copenhagen, 1926. Einar Wegener (Eddie Redmayne) and his wife Gerda (Alicia Vikander) are happily married. He is a painter of muddy, sad-looking landscapes inspired by his childhood memories, while her interests are portraits, although her husband believes she’s still searching for inspiration. In truth, though, it’s Einar who’s waiting to be thunderstruck: when Gerda asks him to pose in stockings as a makeshift model, the sheer touch of the material on his legs nearly brings him to orgasm.

Together, the spouses create the fictional character of the ethereal but provincial Danish girl Lili, who becomes Einar’s alter ego. This subtly perverse game of dress-up awakens deep and dormant truths about Einar, who is subsequently set on the path towards self-acceptance.

Hooper’s film is unsurprisingly affirmative: Einar’s empty landscapes are a reflection of his interior life, which is then filled out (and brightened up) by his experiments with gender performance. The ever-androgynous Redmayne essays sexual role-playing with dignity; Hooper includes plenty of clear, obvious visual metaphors, in an appropriately painterly style. (The film at times resembles an illustrated “Gender Studies for Beginners” textbook). This may be the best way to open up the subject for further discussion amongst a mainstream audience.

At the same time, The Danish Girl goes beyond the subject of transsexuality: it also speaks  to how,  as Lili says, “marriage produces a third person.” The triangular relationship between Einar, Gerda and Lili reveals a universal truth: sometimes you have to let go of the beloved one as an act of love and understanding, so it can “live its own life.”

The Danish Girl is imperfect and sometimes cloying, but in its own way beautiful and honest. Its message is that everyone should have the right and courage to fight for their happiness, which may strike some as naïve from a present-day perspective, but is still convincing and universal—probably enough so to get the Oscar nominations hoped for by the film’s financiers.