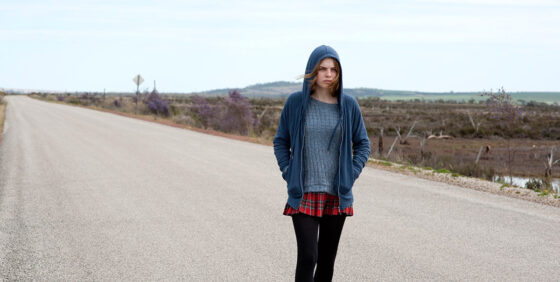 As in her previous Road to Nhill (1997), Brooks uses the Australian landscape for pictorial beauty, but here she also uses it to expose the weaknesses and secrets of her characters. The director creates a topography of loneliness and displacement that is filled in by a new cast of characters after Grace’s disappearance, including her parents (Radha Mitchell and Richard Roxborough). Under the guise of a gone-girl mystery narrative, the film attacks middle-class values and superficiality (Brooks’ influence here is the Robert Altman of Short Cuts). The characters are emotional cripples; in one very funny scene, Dad’s body betrays him in a hotel room while he’s trying to cheat on Mom. These parents are no role models; Brooks’ point seems to be that they’re no more mature than their impulsive daughter, who says at one point “My crime is that I’m young.”

The main disappointment of Looking for Grace is the finale, which replaces the Altmanesque ensemble style with something reminiscent of Kiéslowski’s last works. In the end, the movie becomes very conservative: there is a price to pay for the curse of youth. At this point the audience does not empathize with the characters anymore, or feel their tragedy at all. Wouldn’t it be better to give them real “grace” and just let them go, even if the road leads them nowhere?