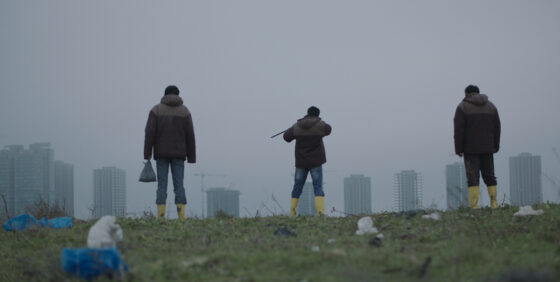 Turkish cinema currently lives under the sign of Nuri Bilge Ceylan; Frenzy throws a new name into the ring. Emin Alper’s 2012 debut Beyond the Hill was a family drama that transformed repressed violence into a sociological parable; his follow-up is a metaphorical study of madness and paranoia as an expression of a hostile sociopolitical system that feeds on the terror of individuals. Say this for Alper so far: he’s consistent.

God-fearing and simple Kabir (Mehmet Özgür) spends seven years in prison. He then gets a top-secret job from the Turkish special forces and is released to work as an informant. Kabir reunites with his brother Ahmed (Berkay Ates), whose wife and children have deserted him. Ahmed’s job is to shoot stray dogs, who serve a reverse symbolic function from that of White God (2014): there they rose up, here they’re mowed down. The film offers a portrait of a nation under construction, encircled by barbarism; the dialogue in one scene describes an entire community—read as: a country—forced into their homes to hide from the violence in the streets.

Alper’s style is to begin realistically and then descend into schizophrenia—it is hard to tell where the brutal social conditions end and Kadir’s increasingly agitated imagination begin. The police state weighs upon the mind; pathology is depicted both macro- and microscopically. The brothers’ relationship is tragic: when Ahmed goes into hiding, Kabir must find him and report him. Ignorance and conformity infect the family dynamic. Terror is everywhere. This is a film with a very modern vision.