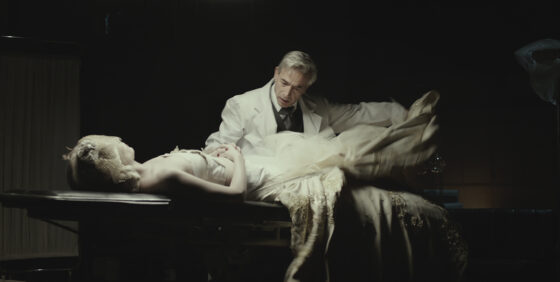 Evita Perón’s luminous corpse gets exhumed for dubious ends in Pablo Agüero’s intermittently engaging Eva Doesn’t Sleep, a mixed-media survey of Argentinean history since the fall of the Perónist government in the mid-1950s. Agüero’s method is to explore the persistence of Perón’s iconography for the disenfranchised by tracking it across a series of disparate historical moments in Argentina’s turbulent political history, in concert with the circuitous pilgrimage of Perón’s embalmed body first out of and then back into her homeland. It’s a relatively fresh conceit, but the assorted set pieces vary too much—not just in terms of aesthetics and length, but of quality—for it to pay off as well as Agüero intends. An early monologue from monstrous Dirty War engineer Admiral Emilio Massera (Gael García Bernal, doing a reverse Che Guevara), who portentously marches toward the camera in the long opening shot, introduces us to Perón’s endurance as a symbol of people power through the perspective of her greatest foe, a fascist who wants nothing more than to bury her. Bernal’s huffing and puffing about “that pagan idol who upstaged God” sets up the stakes well enough, but it also initiates us into Agüero’s dodgy style, which fluctuates from Bernal’s hammy exposition over archival footage, to stiff historical dioramas, to more evocative chiaroscuro tableaux. Denis Lavant has a bit more success in his section as a grumpy military driver—introduced, in title cards ported wholesale from Quentin Tarantino via countless others, as “The Transporter”—who is tasked with moving Perón’s body out of the country under rebel fire. But the film’s closing stretch—an overly talky, sign-posting one-act play featuring the interrogation of a fallen general by a young Perón doppelganger— doesn’t quite live up to the communist interrogator’s assertion that “this isn’t a history lesson.”