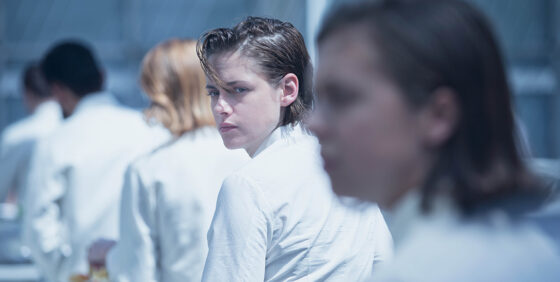 On its surface, Equals is a modern take on 20th-century dystopic science fiction: a mix of Brave New World and Fahrenheit 451, full of characters who feel like they’ve sprouted from Body Snatchers’ pods. At its core, the third episode of Drake Doremus’ sentimental trilogy—after the memory-based Like Crazy (2011) and present-tense Breathe In (2013)—is in fact a soft, romantic, futuristic teen drama which dreams of becoming the cult version of Twilight.

After a brief Zen-like meditation on modern isolation, the meeting of Silas (an expressionless Nicholas Hoult) and Nia (the ever-lip-biting Kristen Stewart, in a tailor-made role) triggers a naïve and sickly-sweet exaltation of clandestine love. Initially employing wide shots to capture the emotional anesthesia of a world where emotions are treated as viruses, Doremus makes a 180º turn to portray the sentimental awakening of the main characters. That’s when Doremus falls into a shallow version of Sofia Coppola’s impressionism, along with some tics from the Wong Kar-wai repertoire, a touch of Malickian editing, and a full stream of Sundance-infused “sensibility,” resulting in an alarming lack of aesthetic interest or emotional drive.

Screenwriter Nathan Parker, who wrote Duncan Jones’ mildly interesting Moon, here displays his duller side: seasoned with Biblical references and Shakespearian crossroads, Equals hits rock bottom with the romantic dialogues whispered by Stewart and Hoult. “Love is like a tornado going around,” Silas blurts out after discovering carnal love. This sentence perfectly condenses the blazing and corny sentimentalism of Equals.