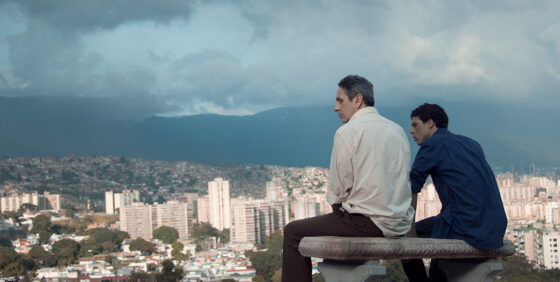 Alfredo, a wealthy, middle-aged man, travels by bus, tempting underage teenagers with large sums of money. They don’t even have to sleep with him or touch him. Alfredo only watches as a harmless voyeur. The rules are very simple: turn around, lean against the wall, pull off your t-shirt and slightly slide down your pants. This staged, somehow innocent bit of deviance becomes a ritual. But one day Alfredo chooses the wrong object of desire…

Alfredo, as frugally played by Alfredo Castro (Pablo Larraín’s favourite actor, best known for his performance in Tony Manero [2008]), never smiles; he’s an oddly sexless peeping tom. His opposite number is the juvenile Elder (newcomer Luis Silva), an avatar of the unrestrained force, crudeness and homophobic violence that blooms on the mean streets of Caracas. In time, a mutual fascination arises between the men, and they find a common language despite their seemingly insurmountable differences. Everything goes smoothly, but only as long as the invisible line dividing the men remains safely intact. Vigas makes the viewer wonder: How thin is this line? Where do the limits of indifference, repulsion, devotion, obsession, or maybe even true love end?

The underlying relationship portrayed in Desdé Alla goes beyond the issue of prohibited homosexuality; it advances a more universal idea about emotional and physical affinities that are affected by differences in age, culture and social status, which inevitably lead to domination and submission. Vigas unobtrusively builds the story to show how something brutal and slippery in the beginning may paradoxically give rise to something passionate and sincere. The finale remains open to interpretation: is the older man treating Elder the way he does because he is afraid of emotional closeness and commitment, or does he do so deliberately and whimsically? Does he use him as an instrument of revenge? This dark ambiguity accounts for the magnetic power of this film.