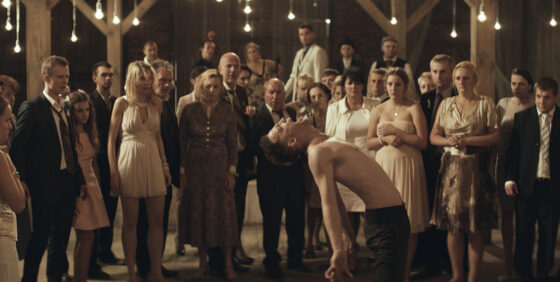 Five years after The Christening, young director Marcin Wrona returns with Demon, a meditation on Polish memory that hints at the need to exorcise the past. He’s attempting to make a serious movie within a genre framework, and he succeeds in balancing the right amounts of fear, humour, and grotesquerie.

Peter (Itay Tiran) arrives in the Polish countryside from London to marry the beautiful Żaneta (Agnieszka Żulewska), the sister of his best friend (Tomasz Schuchardt), in a lavish wedding that has been meticulously planned by the bride’s disapproving parents. Wandering around before the ceremony, Peter stumbles across buried human remains, which sets off a chain of events that includes our hero’s full-bodied demonic possession by a dybbuk. The malicious spirit won’t leave Peter’s body until it’s accomplished its goals, which include disrupting the nuptials as spectacularly as possible.

This concept of the dead taking revenge on the living—and the past on the present—is expressed in Demon through relatively conventional means, the sturdy tropes of supernatural thrillers and horror movies. While Demon is attractive enough visually to evoke the films of Lars von Trier (especially Melancholia), the setting of the wedding ceremony has a long tradition in Polish literaturę and film, dating back to the work of Stanislaw Wyspianski. The crowded mingling of vodka, folklore and chiromancy still permits space for reflection on the social and moral condition of a country whose inhabitants seek self-determination yet dance blindly and sleepily, like puppets; as the father of the bride confesses “our beautiful country is lying on corpses.” Through his poltergeist fable, Wrona gets at a nation’s sense of displacement and dementia. Perhaps Demon could have been even harsher, but as the characters say about the groom, by way of Some Like It Hot, “nobody’s perfect.”

Tagged with → Canada
TIFF 2015 | Return of the Atom (Mika Taanila & Jussi Eerola, Finland/Germany)—TIFF Docs) Failure Hasn’t Spoiled Him Yet: Alan Zweig Succeeds in Spite of Himself