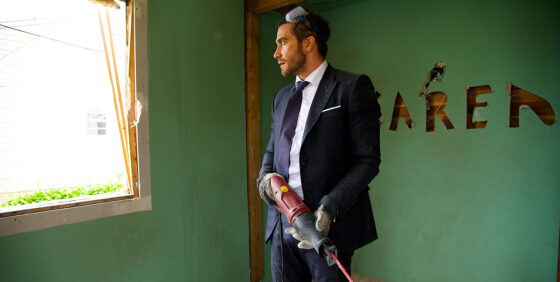 (N.B. This is presented absent any editorial intervention.)

It’s a gift for his public how that in recent years Jean-Marc Vallée has been bringing each year a new film to TIFF. Demolition in particular is unique in that instead of using the premiere platform to build hype for the Oscar season, Vallée is opting to release the film in April 2016. Perhaps it’s because he now has the power to decide its release and the film and its subject matter makes it more of a ‘spring film’? Or perhaps to avoid the toxic competition of the Oscars award ceremony? (“We received less love at the Oscars for Wild, said Vallée, you can detect this in people by how they shake your hand and say hello.”) Or maybe its star Jake Gyllenhaal wants more attention on his other potential nomination? Or maybe because of the complications, due to copyright, in getting his next Janis Joplin project off of the ground? Either way, its placement in the Opening Night slot of the festival and it’s very few screenings (all very early at the festival) give the film a palpable aura of mystery. It recalls the 2010 screenings of Vincent Gallo’s Promises Written in Water (a film which it shares many thematic similarities).

In Karen Walton (Ginger Snaps) introduction to C.R.A.Z.Y. as part of Canada’s All Time Top Ten, among saying many nice things, argued that Vallée had always wanted to make American films—well this is untrue. In his essay on the film, “Approche du Réalisateur,” Vallée wrote, “Regardless of the film, my approach to cinema has always been the same: to tell a story with the sincere desire to provide the best spectacle possible.” In a Canadian film climate where 24 Images is publishing dossiers on the miserabilism of the recent Québécois films and The Globe and Mail is arguing the lack of interest and viability of English Canadian films—Vallée’s natural predilection is to cross borders to make the best films possible and to find the largest audience. But there’s nothing necessarily ‘American’ about them, as instead Vallée’s continuing to chronicle humanity in its flawed forms and its potential for rediscovery (as Annie St-Pierre comically illustrates in her NFB video on him).

Demolition, based on a script by Bryan Sipe, tells the story of an investment banker Davis Mitchell (Jake Gyllenhaal) whose wife Julia (Heather Lind) dies in a car crash, and its aftermath regarding his feelings towards her, his life and what to do next. Afterwards there’s the chance encounter between Mitchell and a vending machine customer service representative, the working-class Karen (Naomi Watts), and their strange blossoming romance.

After the act of creation as experimental medicine (Dallas Buyers Club) and writing a memoir (Wild), with Demolition Vallée turns his gaze towards the art of destruction. After Davis’ wife death, he becomes fixated on deconstructing objects (a fridge, lighting, a washroom stall etc.) to the point of tearing down his home. Similar to the gun practice scenes at the empty mines in Matt Johnson’s The Dirties or the rugby scenes in Kazik Radwanski’s How Heavy This Hammer, these acts of violence in Demolition are also violent, cathartic and extremely cinematic. They emerge from the confusion of emotion and the existentialism of life.

Vallée’s directing has a transparent simplicity in its attention to characters and story while also continuing to explore subjective point of views and editing. Demolition is Vallée’s greatest film as it combines the best qualities of Café de flore and Dallas Buyers Club. It’s his most free spirited film with one the great new American actors. The music in it, as you could expect, is great too.

But as great as are the lead actors, there’s more to Demolition then just the world of its adults and this is what makes it so valuable: youth, the next generation, and what’s going to succeed us. This is incarnated in Karen’s teenage son, Chris. One must remember that two of Vallée’s favorite films are Les bons débarras and The Ice Storm to realize that children and coming of age are some of his major preoccupations. There’s a reason that Vallée’s Hitchcocko-Truffautian cameo is at the wife’s funeral as he gently picks up a child. Chris in Demolition incarnates, just as much as Zach did in C.R.A.Z.Y., youthful rebellion and the potential for filiation. There’s something about the old corporate world that’s dying and Chris is the image of the punk and rock-and-roll spirit that will succeed it.

If Demolition is Vallée’s best film, regardless of its acting and formal accomplishments, it’s due to its hardened and clear optimism. Vallée is now most explicitly addressing the idea of legacy (similar to Hawks when he made Land of the Pharaohs). The parents of Davis’ dead wife Julia are planning to create an educational fund in her memory. Davis, after a lot of soul searching, realizes that it’ll be best to restore an old merry-go-round. The film ends with it active, full of children with Down syndrome. The nice moments in life are short. It’s best to create joy.

And with new documentaries at the festival on Janis Joplin (Janis: Little Girl Blue) and John Franklin (Beyond the Horizon) the world is now just getting ready for what Vallée is going to show us next.