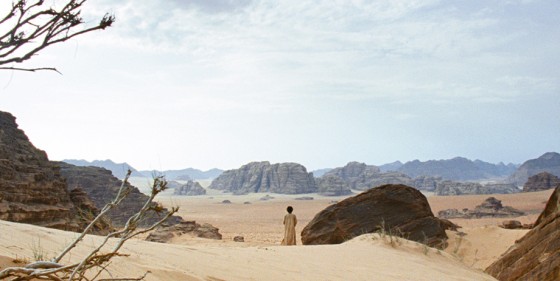 This debut feature from Abu Nowar starts out in a very familiar place, even though it still retains a certain exotic mystique for many filmmakers. We’re in the desolate hill country of an as-yet-unspecified part of the Middle East, where tribalism and patriarchal authority are the only real forms of social organization. Numerous films have depicted not only the unduly harsh conditions of such a modest existence, but the fact that people who exist in such situations are likely to make decisions that may well be incomprehensible to those of us living in more varied economies. In short, the depiction of Middle Eastern tribal poverty tends to evoke a wide, fetishized distance on the part of the Western viewer, as if we were standing before an exhibit at a natural history museum, insensitive to the fact that we are really coexisting in the present.

Part of what makes Theeb such a breath of fresh air is that it narrows its focus, examining a group of individuals (and one in particular) rather than getting stuck in well-meaning liberal “typicality.” Theeb (Jacir Eid), the youngest son of the recently deceased tribal chief, is fascinated and perplexed when a white Englishman (Jack Fox) arrives amongst a group of visitors from a neighbouring tribe. Gradually we learn that he is helping to foment tribal war so he can acquire land for the burgeoning railroad through Asia Minor. None of this is every directly stated, though. More significantly, the final two-thirds of Theeb is about the kid’s resourcefulness and apprehension in the aftermath of an ambush in the valley; Theeb’s immediate survival requires making nice with one of the bandits who attacked him in the first place. So much of Theeb is allowed to emerge gradually, naturally. (I didn’t even realize that the setting was World War I, until the preoccupation with the “iron donkey” clued me in.) Theeb has most of the elements of a classic western, even ending up in a mitigated curmudgeon/moppet scenario. Abu Nowar’s film at times reminded me of “Death in Timbuktu,” the fake developing-world western that Abderrahmane Sissako stuck in the middle of Bamako. These non-professional Jordanian performers, like the story itself, are stuck between the elemental and the everyday, and are managing to get by.