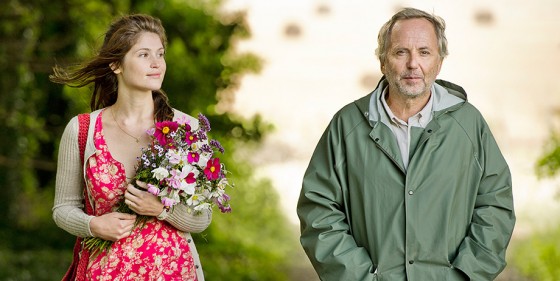 Adapted from the literate, gently sardonic graphic novel by Guardian cartoonist Posy Simmonds, Anne Fontaine’s Gemma Bovery retains little of the source material’s Renoirian humanism and none of its murky thematic and visual greytones, but regrettably most of its plot. Since the outlines of Simmonds’ Gemma were themselves lifted from Flaubert’s Bovary—in which a bourgeois housewife (Gemma Arterton) becomes bored with her dutiful but tedious husband (Jason Flemyng) and carries on a foredoomed affair with a scion of the local gentry (Niels Schneider)—the motions that Fontaine’s film goes through feel doubly rehearsed and entirely pointless. Gemma Bovery updates the story to the present day, makes the Boverys Brits, and views Gemma’s straying through the eyes of a besotted neighbour, Joubert (played here by Fabrice Luchini, sporting the hangdog look of an actor with not much to do, though I think it’s supposed to come across as “lovesick”). These slight shifts in focus allowed Simmonds to index the petty resentments and aspirations of the contemporary middle class in a spirit that at least resembled Flaubert’s. But Fontaine’s script (co-authored by frequent Rivette collaborator Pascal Bonitzer) seems uninterested in much besides ticking off the increasing number of similarities that arise between the lives of Gemma and her namesake, forcing the characters into awkward and halting lockstep with the behaviours of their literary forebears: their tragic ending is not so much fated as forced. Arterton, who also essayed Simmonds’ Tamara Drewe in Stephen Frears’ eponymous 2010 film, manages to maintain some charm and dignity in a role which repeatedly sees Joubert’s POV linger leeringly over her in slow-mo (to say nothing of the embarrassing bit of clowning when he must treat her backside for a bee-sting), and Edith Scob’s guest spot as a no-nonsense grande dame is welcome, though brief. Still, the movie is so denuded of insight and incident it ends up more cartoonish than the comic book that spawned it.