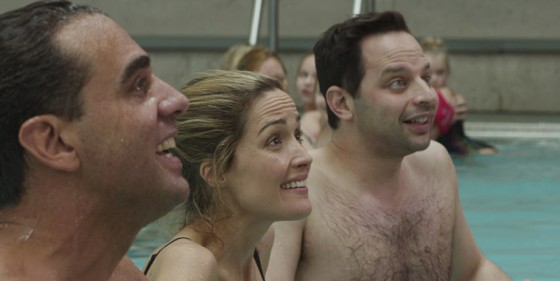 Had this movie actually centred on the late-in-life learning-to-swim class alluded to in its title (though never depicted onscreen), maybe some of the excellent bit players horsing around its edges could have jumped in and stirred things up a bit. I imagine a film in which the wearable-tech guru portrayed by Nick Kroll (introduced in a misleadingly funny Kroll Show-ian fake ad to kick off this otherwise bland, boring movie) wades into the waters alongside the other kidults from the film’s margins, like the manic nanny played by Kroll’s League co-star Jason Mantzoukas, Bobby Moynihan’s dead-eyed low-level manager, or Jane Krakowski’s thin-lipped swimming instructor, all of whose too-brief appearances buoy up the leaden proceedings. Instead, alas, that title merely telegraphs the fact that the film is about growing up, starting afresh, and learning new lessons. Following the credits-sequence bust of his big-money start-up, Kroll’s big city high-roller crashes with his sister’s family in the suburbs, looking after his toddler nephew for room and board plus pocket change. Will Kroll learn to value his family more than his business? Will his sister (Rose Byrne) and her husband (Bobby Canavale) learn to love again? I defy you to care. The leads have all fully committed to their roles as transparent stereotypes, and while the vapidity of Byrne’s and Canavale’s normlords may border on the insulting (her way of unwinding from family strife is to hunker down with The Vow and some junk food; his is to spark a doobie or boink a co-worker), it’s mainly just disheartening to see Kroll be so nondescript, especially in a project he seems to have cared about (he receives co-credit for writing the story). Perhaps, exhausted by taking on so many personae for his own show, he wanted the opportunity to just play a nobody. Kroll at least shows he can stay afloat as a comedy’s lead actor; now he just needs to take the plunge and be funny, as well.