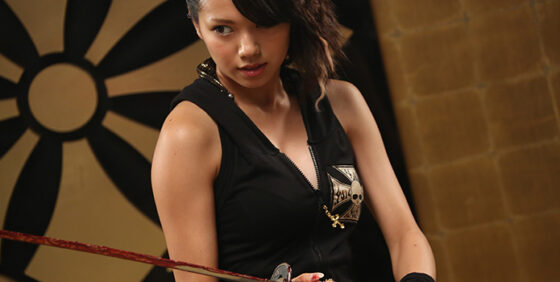 Sono Sion’s cinema is marked by disproportion. Taking great pleasure in busting through form and conventions, his films are often regarded as being “too” everything: too loud, too violent, too implausible, etc. Why Don’t You Play in Hell? is all that, and much more. Its entertainment value defies any rational analysis, and in the same vein, its plot makes less sense the more you explain it. Basically, it’s about two rival groups of gangsters—one of them led by the young, pretty and lethal Mitsuko (Fumi Nakaido)—setting out to slaughter one another due to a feud over a controversial toothpaste ad. Their rabid vengeance-mongering greatly benefits of a group of amateur filmmakers who call themselves the Fuck Bombers, and whose director vows to die if the “Movie God” would only allow him to make “that one great film in my life.” With an action movie unfolding right in front of his eyes in the form of the gangland war, it’s no question that this will be it.

The film is based on a script Sono wrote 17 years ago, and maybe this is the reason why it doesn’t strive for more depth or outspoken political concerns as in some of his more recent films, like Himizu, The Land of Hope, or his Hate trilogy of Love Exposure, Cold Fish and Guilty of Romance. And yet amidst all the gushing blood and shouted dialogue, Sono addresses some aspects of the movie business: there is a discussion about the disappearance of 35mm, and at times the film feels like a satire about the ties between the Japanese entertainment industry and the Yakuza.

In those moments that Why Don’t You Play in Hell? lacks substance—which are numerous—Sono turns this into a virtue. He reminds us that cinema is at its most pleasurable when it touches something deep inside. It might mean literally showing intestines, but that works too.