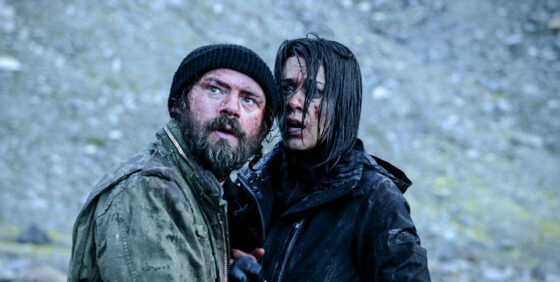 One is tempted to see The Station as a sort of remake of The Thing, as the landscape is quite similar to that of John Carpenter’s Arctic classic, and so is the plot: a group of people working in a snowy weather station in the middle of the Alps are threatened by some creatures, and red liquid sprays in every direction.

The film could be much better though. We know it, because we’ve seen it. And I’m not thinking only about The Thing, I’m thinking also of The Thing‘s recent remake/prequel, where the landscape, the isolation, and the scary things both seen and suggested is far more powerful. The Station, however, isn’t interested in aesthetics—rather, it’s focused on plot and acting, and the actors aren’t so good. The creatures are well-designed without being particularly special or original (as in the nicely artisanal Splinter), and there isn’t a strong enough feeling of isolation (as there was in Alexi Popogrebsky’s How I Ended the Summer). Despite its stripped-down set-up, The Station fails to play to its strengths. They’re all there: the dirty, unglamorous interiors; the remote, mountainous location; the hidden creatures that burst forth. So why bother with the relationship between a troubleshooting technician and a young woman travelling with her family? Both versions of The Thing had something in common: their directors understood that less is more. The Station tries to do too much but it doesn’t go deep: it’s all surface.