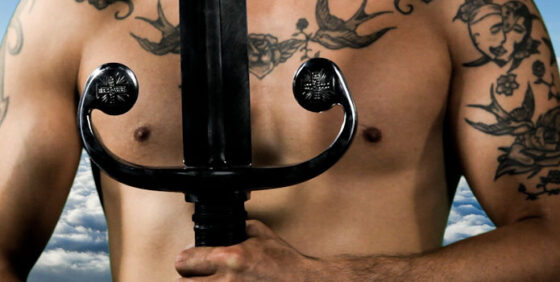 The King’s Body is at least the third film this year to play with a formula in which the filmmaker(s) provide an environment and scenario and introduce to it a variable (people, actors), the ensuing interaction between the controlled and uncontrolled becoming the source of the film’s meaning; the two others I can think of are Killing Strangers (Nicolás Pereda & Jacob Schulsinger) and Manakamana (Stephanie Spray & Pacho Velez, also at TIFF). All three films have successful results, mostly for knowing what to control and what not to, ultimately allowing the personalities on screen their own spontaneity. In The King’s Body, João Pedro Rodrigues sets up a camera and a green screen and hires a multitude of large, muscled men who, before stepping in front of the lens, know nothing of the filmmaker’s intentions. With footage of the statue of Dom Afonso Henriques, Portugal’s first king, in the background, these men are asked to undress, read passages about the king aloud, and wield a sword—but the real fun begins when Rodrigues begins to quiz his subjects about the king and Portuguese history, often with humorous and endearing results. Beginning as an investigation into the collective memory of the past, it doesn’t take long for the film to become a portrait of the present as each of the men describe their lives, a fair number of which are affected by the economic crisis. The ironic clash between the mythic imagery of the king and these strong yet vulnerable characters is touching, and raises questions about the intersection of history and personal identity.