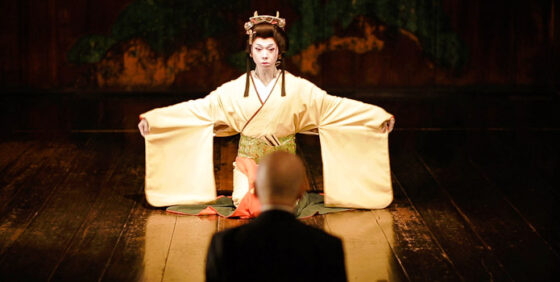 A Raccoon and a Fox discover a Human burying a bag of gold. Certain that he has much more of it, the two animals transform into humans themselves, and bet on which can convince him to hand over his wealth first. The catch: they must remain humans until one of them wins. Guillaume Giovanetti and Cagla Zencirci’s Ningen tells this classic tale from Japanese folklore in the form of a realist drama set in contemporary Japan, focusing on the post-transformation part of the story (each “animal” takes the form of, and is played by, a human) and centring on the scam’s target, Mr. Yoshino (Masahiro Yoshino), a suicidal elderly man unable to cope with the impending demise of the company he presides over. How Yoshino and his co-workers, friends, and family fit into the film’s fantastical premise is at first kept a mystery, an enigmatic approach that only keeps the viewer unnecessarily at a loss about the movie’s intentions. The final section, in which the Raccoon, his identity finally revealed to us, goes searching for the Fox in an enchanted forest, returns firmly to the realm of myth and is the film’s finest moment, largely because of a compelling mix of surreal visuals and hypnotic sound design. But it’s not enough to save a film that begins as a simple, modern-day folktale but by its close has become tangled in digressions.