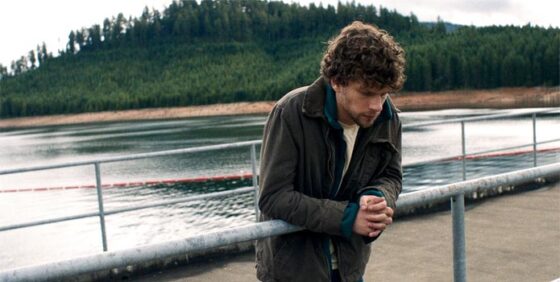 It’s remarkable how Kelly Reichardt takes on different genres and makes them her own, undermining expectations by moving elliptically within specific conventions and creating a radical atmosphere. In Meek’s Cutoff, she chose to shoot a Western from the restricted perspectives of her characters, as if from underneath the brims of their hats, never granting their visions the width of the CinemaScope frame, and indeed it’s Meek’s Cutoff that most directly relates to Night Moves, even as Reichardt has changed up her visual palette. Shifting from the blurry heat of Oregon’s salt desert to the black forests and murky waters of the Pacific Northwest, the film takes its title from that of a boat that three young environmentalists have loaded with explosives to bomb a hydroelectric dam choking a stream and flooding old forests.

Josh (Jesse Eisenberg) and his girlfriend Dena (Dakota Fanning) meet up with their dubious leader Harmon (Peter Sarsgaard) over one weekend for a series of nightly meetings. Their plan is to part ways after the deed is done, but as things gradually start spinning out of control, Reichardt displays her usual talent for balancing a moral tale with signs of a social conscience. (The film’s thriller elements, however, are something new, notwithstanding the lovers-on-the-run format of her debut River of Grass).

Night Moves is mainly focused on Josh, who doesn’t talk much but radiates a cold-blooded urgency. This is Eisenberg’s most introspective performance to date, and taking cues from his performance, the film unfolds with a steady, measured pace. Once again collaborating with screenwriter Jonathan Raymond, Reichardt investigates the power of her characters’ moral principles, as well as the power that those principles hold over their heads. Night Moves is about the consequences of extreme actions within a corrupt and corroded industrial culture, where the right moves share a greyly shaded quality with the wrong ones.