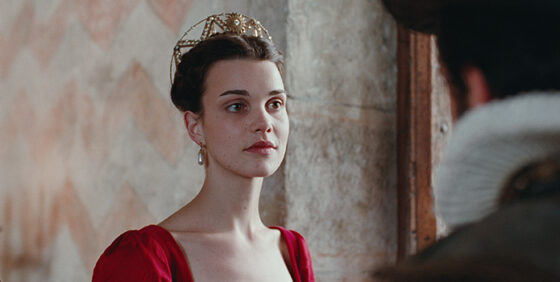 Thomas Imabch’s Mary, Queen of Scots seemingly has a lot going for it: rising actress Camille Rutherford, who gave a memorable lead performance in Nicolas Klotz’s Low Life two years ago; a solid supporting cast (Mehdi Dehbi as Rizzio, in particular, steals the show); a wintery mise en scène that de-romanticizes the period and captures not just the title figure’s alienation but the chilly distance and thinly veiled enmities that permeate this world of formalities and fickle allegiances. Yet in spite of all this, the film fails to come together as anything beyond rudimentary, and that failure is distinctly directorial. Not only incapable of calling forth the full potential of his cast, Imbach further blandly orchestrates what should be ripe material for melodrama, and relentlessly applies that most tired of faux-realist affectations (honestly, you can afford a tripod), bringing us not closer to “truth” but as far from a sense of the characters and their environment as possible. The film is clearly trying to steer clear of the traditional pitfalls of costume dramas in its understated, psychological portrait of this tortured woman, but in actively denying surface pleasures its studiedly clinical manner has no real effect—its an ostentatious act of reduction that offers nothing new in place of that which it makes a show of avoiding.