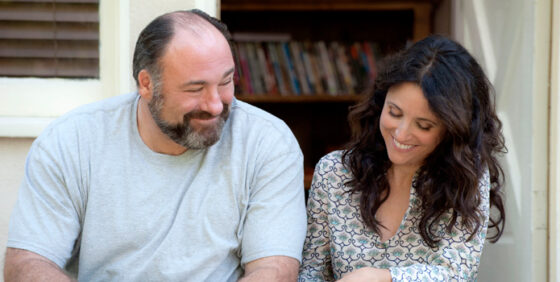 First things first: in his final screen performance, James Gandolfini is pretty good. For all the years that he played Tony Soprano, Gandolfini’s secret weapon was an unlikely sexiness—a quality steadily buried under layers of bad behaviour and cellulite, but still visible to the character’s lovers and the show’s audience alike. Gandolfini’s character in Enough Said is similarly alluring in spite of himself, and in a witty stroke of star casting, Julia Louis-Dreyfus finds herself in the sort of dilemma that used plague her old pal Jerry Seinfeld on a week-to-week basis: Will she stay with a guy whose most annoying/disgusting habits threaten to fatally overshadow his subtle good points?

Sitcom scenario, meet sitcom aesthetics: Enough Said, which is set in a Los Angeles so blandly lit that it barely seems to be playing itself, is a movie that seems made to be watched on On Demand (or on an airplane). Taken on those terms, it’s a perfectly enjoyable piece of work, perhaps a notch or two below Nicole Holofcener’s previous Please Give, which foregrounded class and money where this follow-up lets those issues simply fade into the haze. The satirical potshots levelled at Louis-Dreyfus’ bourgie-poet pal (Catherine Keener), who has no friends except for Joni Mitchell and who (in a plot twist that the trailers have already spoiled so I take no responsibility for same) turns out to be Gandolfini’s ex, land with a gentle thud. Holofcener is probably too nice a person to really excoriate any of her characters, but since the only thing distinguishing Enough Said from a half-dozen other movies of its ilk are its hypothetically sharp-edged observations about midlife romance and fractured family dynamics (both Gandolfini and Louis-Dreyfus are divorcees), it’s a shame that the writer-director works so diligently to sand them away by the end.