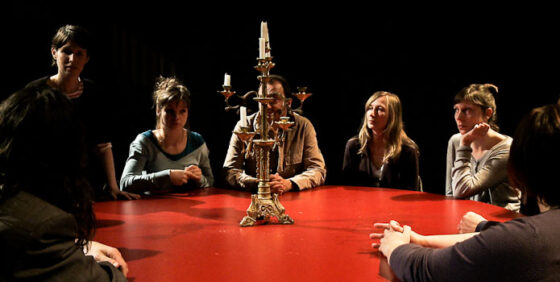 Every Film Must Be an Exercise: Cristi Puiu on Three Interpretation Exercises

Cristi Puiu’s new film Three Interpretation Exercises is exactly that: three discrete, roughly 50-minute sequences, improvised with three groups of four actors, which grew out of a workshop Puiu was invited to lead in Toulouse. Puiu spoke about the film’s development after its international premiere at the International Film Festival Rotterdam.—Aaron Cutler

Three Interpretation Exercises is not exactly a film. It happened to become a film. There is a French association called Les Chantiers Nomades that arranges workshops for professional actors in France with film directors, theatre directors, and scriptwriters. In 2008 I was invited to Grenoble, where I chose to make a film based on Harold Pinter’s Ten Sketches, and since it was a good experience, they invited me again. In the spring of 2011 I went to Toulouse to lead another workshop, this time on acting for cinema, with actors who I would cast blindly. I didn’t know what to do, exactly, until I said to myself, “This is a good opportunity to redo Rohmer.”

About ten years ago I wrote an article in a Romanian magazine, presented as a letter to a film critic, in which I complained caustically about the state of Romanian cinema. It was called “A Letter to Maurice Schérer,” which was the French New Wave critic and filmmaker Éric Rohmer’s real name. When I originally started working on my film The Death of Mr. Lazarescu (2005), it was intended to be the first of six stories from the outskirts of Bucharest, in homage to Rohmer’s Six Moral Tales. Rohmer stayed with me. I was on the cusp of buying a published Rohmer script to remake for these exercises, then thought it might be even more appropriate to remake some sequences of Jean Eustache’s film The Mother and the Whore (1973). And then, the morning I left for Toulouse, I chose a book by a Russian philosopher named Vladimir Solovyov that seemed like the most appropriate source of all. In Romanian, the book would be called Three Conversations followed by a short story about the Antichrist. I was going to the country of Descartes to meet a bunch of rationalistic French people, and we would build scenes together by talking about things like religion and the nature of morality.

I reread the book on the plane while Luchian Ciobanu, the Romanian director of photography who went with me, discovered it for the first time. I found the best French translation for the actors that I could by looking online, then gave it to them and told them, “Listen, we are going to spend three weeks together. We have two options: We can make a holiday out of watching and talking about films, or we can learn what acting for cinema is by making a film ourselves.” We would memorize the text and interpret it for the camera through three scenes, each containing four actors. The film would never be seen by any audience beyond us, but it would still be made obeying all the conditions of a normal shoot.

The actors were game, and accepted the challenge. I then imposed more conditions. Solovyov’s book was published in 1900, and I demanded that they make it into a text for 2011. They could improvise however they wanted, but they could not lose the sense of the text. I have problems with actors in other films who I feel are faking their roles—they are speaking the correct lines, but their minds are elsewhere, observing their bodies. I did not care what specific words the actors I worked with were saying, so long as they were mentally, emotionally, and spiritually present to say them.

I am very demanding, and so I knew that I needed to put something solid onto the table for them to trust me. I put onto the table my fears. There is a moment in the David Lynch series Twin Peaks (1990-1991) when the character of Major Briggs is asked what his worst fear is, and he replies, “That love will not be enough.” Love is the ultimate protection we can imagine, and I think that the fear that it will not be enough is somehow defining our present time. People are not articulating this fear, maybe because they are also afraid of losing control—of love, as well as of their entire existence. But, at the same time, I know that it is in moments when we lose control that we are most true to life. If we are in danger, we are not going to deliberate, we are simply going to act; and if we feel protected by someone else’s control, without controlling anything for ourselves, we don’t have to pretend to be anybody but ourselves.

By showing the actors my fears, I believe that I showed them that I was as human as they were. This led them to be comfortable with me, and even respect me. I then proceeded very diligently in rehearsals, pointing out every faux pas they made while urging them not to take it personally. I explained that I was criticizing not them, but their proposals. I said “no” many more times than “yes,” because it was clearer to me what the wrong paths were than what the right one was. Above all I worked, as I do on all my films, on creating a reciprocal, triangular love relationship between them, the audience (if there would be one), and me and Luchian, who, as someone who needed to be present at each moment of creation, was an actor himself.

Luchian was very receptive to the exercises on an emotional level, but I still had to work with him to break his tendencies. I usually have problems with my cinematographers. In Romania documentary films are considered the black sheep of cinema, and as a result most Romanian films look too staged. The cameramen watch the frame’s shape more closely than they do the people within it. Me, I don’t care about making beautiful images. While the composition is important, the people must be more important. I like the imagery in my films to be rough, which is an aesthetic choice, but this roughness comes as a consequence of expressing curiosity about and paying close attention to the people acting in front of the camera. We are searching for something more precious than any composition, which is life, and since life is ineffable, we must be on the move to catch it.

I believe that Rohmer’s films catch something both unrepeatable and ineffable by creating a relation between human and cosmic time. And at points I believe our final film also does this. The first exercise begins with an 18-minute improvisation between four people seated at a table in a garden. They are chit-chatting about bullshit, there is a conflict which is completely stupid and absurd, they are expressing conformist preconceptions about class and gender and religion, and talking largely in order to create sound, because if they don’t there will be silence. At the same time, there is an ongoing play happening between sunshine and clouds blocking the sun. This contrast was accidental—we shot in the springtime, and spring is unstable.

Seeing the contrast between human and cosmic time here, as well as in the subsequent apartment-set exercise when people talk while watching an Apichatpong film, changes me. I am not wiser now. I am in fact more scared and uncertain from having realized some of my limitations. The things I like most in my films are things that I did not put in them, and that do not come from me. This film contains many moments of grace. I choose to believe that they come from some kind of intervention, and if I have to be brutal about what that intervention is, I will say God. Saying this does not make me religious, but rather means that I can believe in something beyond what I know. Our rational formulas are not enough to explain how the world works, and we must look past them for something else.

So this is how cinema has to be made now, I think—every film must be an exercise. Though these specific exercises were not made with the intention of being shown publicly, I am very happy that programmers are now inviting the film to festivals. I think that it deserves to be seen, and that the exposure is great for the people I worked with. “Actors” is really an administrative term. We live in society without wanting anarchy, so we say that some people are actors, others are directors, others are cinematographers, physicists, mathematicians, doctors, and so on. But I don’t believe this to be true. Anybody can be anything, the only differences come from your choices to study one domain or another. I am working with a camera, you have a computer to type on, others are using medical equipment, and there are no professions. There are only people trying to understand the world better by using different sets of tools.