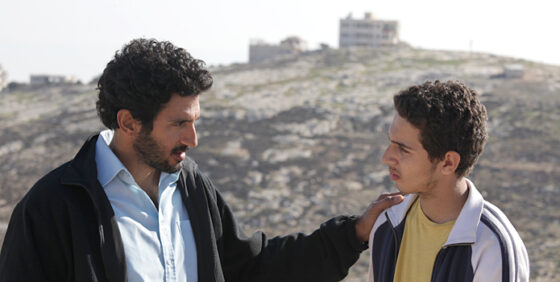 Utterly circumscribed by its political geography, Yuval Adler’s Bethlehem delineates the Israeli-Palestinian conflict through the eyes of a Palestinian teen, Sanfur, who at film’s outset is boldly protesting to his peers that he’s got the nerve to take a bullet to the chest (aided by a protective vest presumably looted from Israeli officers). That he spends the remainder of the film maimed from impact—which the director casually elides—is evidence of Adler’s desire to maintain an uncompromising veracity to a conflict that loops concentrically among familial, religious, and political loyalties. At once a willful warrior in the Palestinian cause and an informant to a doting Israeli officer who took the boy under his wing at an early age, Sanfur shuttles between this surrogate father figure and his older brother Ibrahim, who’s high on the Israeli secret service’s hit list. There’s an action sequence in which Ibrahim is tracked and cornered into a nasty gunfight that shows off Adler’s knack for kinetic warfare on a street level, while being insightfully detailed in its exposition of political haranguing among Hamas and the Al-Aqsa Martyrs Brigade, who ironically compete for corpses felled in the cause. The salient publicity point for the film seems to be its escalated but not inflamed sense of partisan politics, owing to a script co-written by Adler and Palestinian journalist Ali Waked. The film will unfairly beg comparison to Hany Abu-Assad’s Paradise Now by virtue of context alone, but a more instructive reference may be Abu-Assad’s documentary Ford Transit, for the way it provides incidental insight into a conflict by focusing on one of its chief movers—namely the white trucks that once belonged to the Israeli army but have since been inherited by Palestinian taxi drivers. Bethlehem is compelling for its regional exposure, but a tendency for narrative velocity and plot machinations (otherwise known as a thriller) gives away the film’s ultimate agenda as genre-dependent, regardless of site-specificity. Credit to Adler though for the necessarily unhappy ending.