Through the Looking-Glass: Tsai Ming-liang’s Your Face 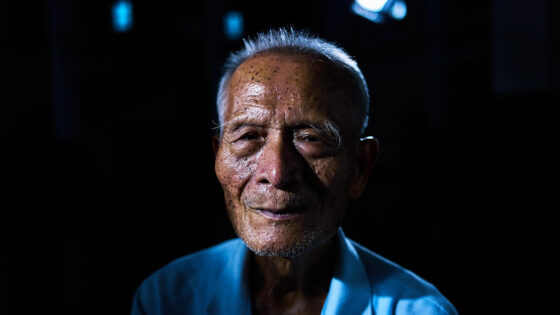 In his 30-year career, the now 61-year old Tsai Ming-liang has made an entire oeuvre centred upon the practice of looking. Such a statement may seem like a given for any filmmaker, but Tsai’s particular formalist tendency of slowly developing long takes has always placed an emphasis on the dynamism of unfolding time and space that distinguishes his work in the context of art cinema both past and present. His visual style (less austere and more playful than many of his contemporaries) and sense of rhythm have been present at least since his first theatrical feature, Rebels of the Neon God (1992), along with an oblique but engaging narrative richness that accumulates from film to film, creating the feeling of an expanding world unto itself.

Following his last “proper” feature, Stray Dogs (2013), Tsai has pared his work down and largely migrated it to different forums and mediums, creating a series of installations, a minimalist theatre piece, and, recently, a foray into VR. Occasionally, as with the Walker films—which follow the progress of a remarkably slow monk (played by Tsai’s graceful and ever-present muse, Lee Kang-sheng) as he moves through different spaces at a snail’s pace—these projects spill back over into film, and end up screening at festivals and in theatres. But even given these intermittent “returns” to the cinema, Tsai’s filmmaking has moved towards an even more radical minimalism that tends to hone in on a single set of gestures—an increasingly limited sense of parameters that illuminate and reveal through an even more focused and specific act of looking, of paying attention and being present in the image.

Given this turn in his later work, it is hardly surprising that Tsai’s latest project, Your Face, is simply a series of 13 close-ups of 13 human faces—though it is ultimately less a study of these visages themselves than of what lies beneath them. (In an unprecedented addition within this project of determined subtraction, Tsai actually includes a musical score, but Ryuichi Sakamoto’s enigmatic, droning compositions hardly distract from the film’s extended experience of contemplation, and give some room to an otherwise confined visual space.) Before the inevitable appearance of Lee, Tsai introduces us to 12 people that he found while wandering around Taipei. With no context provided within the film itself, we spend time settling in with them in silence before Tsai strikes up a conversation, letting them share anecdotes of their choosing from their lives. The first audible utterance in the film is Tsai himself asking, “What would you like to talk about?”—a query that is addressed to both the subject, and the viewer.

As the film progresses, the subjects’ eyes rarely meet the lens, presumably meet with Tsai’s, but mostly seem to fix on unseen parts of the surrounding room. A couple of the interviewees fall asleep, one snores, one plays harmonica, one sticks her tongue out and moves it around. (An interview with Tsai and Lee on the Rotterdam Film Festival’s website reveals this latter subject to be none other than Lee’s mother.) Most of the subjects are quite old, and have evidently been chosen for the way their faces express more about time and the gravity of a life lived than words can. As they gaze towards or beyond the camera, as they scan their memories and thoughts, the act of looking in Your Face becomes a complex one, one participated in by those in front of and behind the camera as the seemingly fixed direction of our own gaze gradually frees itself, moving through time, life (ours, theirs), and perhaps even death. (That two of the subjects have since passed away underlines the film’s articulation of transience.)

While it’s unlikely that Tsai, in the nominally “documentary” context of this project, consciously set out to combat or undermine the talking-heads format that continues to dominate that genre, he nevertheless succeeds in reminding us how a close-up is not for a sound bite but for faces, emotions. Cinema allows us to study the human face in a way real life does not permit, and Your Face emphasizes that privilege and breathes life into one of film’s oldest (and now most over-utilized) techniques. In this amorphous chapter of Tsai’s post-narrative career, his camera is as inspired as ever, looking and finding more with every frame.