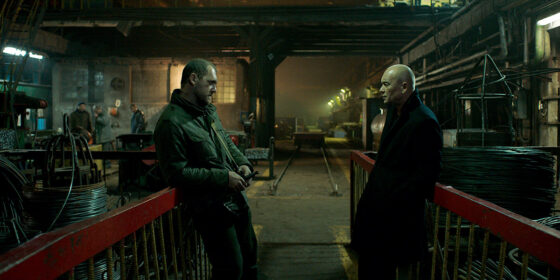 A slice of social criticism so direct that it’s hard to believe it could be made inside Putin’s Russia, The Factory is also a cracking actioner of the first order. Young auteur Yury Bykov (The Major, The Fool) has imbibed lessons from both his black-hearted Russian compatriots (the late Aleksei Balabanov, especially) and the masters of Asian gangland cinema. There is a definite post-communist Johnnie To feel to this, with coolness and hard, reflective surfaces replaced by utter exhaustion, metal, and rust. Honour remains, but anything else, even working ordnance, is extremely hard to come by.

Local oligarch Kalugin (Andrey Smolyakov) has purchased a post-Soviet factory for pennies on the dollar. One day he announces that he’s going to close it—this, after not having paid the employees for months. So one worker, the sullen, one-eyed man known as Grayhair (Denis Shvedov), makes a plea to a group of fellow workers: let’s kidnap Kalugin and ransom him for what we have coming to us. The customary gang of ragtag pseudo-criminals assembles and, naturally, things go very, very wrong.

A standoff ensues at the factory between Grayhair’s men, the police special ops team, and Kalugin’s own private security detail, led by Fog (Vladislav Abashin), a man with his own tragic backstory. In true classical fashion, there are deals and double crosses, defections and late-in-the-game revelations. To Bykov’s credit, he keeps the tension chiefly psychological until the third act, when he relieves said tension with some exceptionally well-choreographed gunplay. But this is a film with class relations in its sights. Kalugin is obviously a stand-in for Putin, a ruthless man whose rise to power has both a toll of misery and a body count. The Factory is Bykov’s tale of the abandoned shop floor as a bloody referendum on post-Soviet Russia, the hollowed-out industrial base weaponized as the return of the repressed.