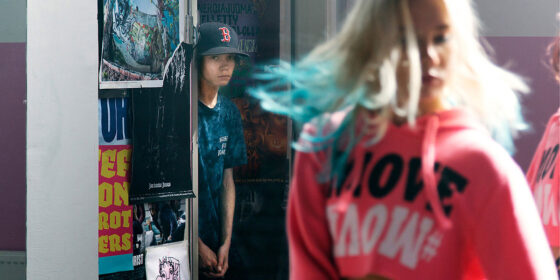 In Selma Vilhunen’s sophomore feature Stupid Young Heart, white nationalism exists as a necessary evil during a young boy’s rite of passage. Routinely bullied for his small stature, Finnish teenager Lenni (Jere Ristseppä) oscillates between reticence and bouts of anger. Kiira (Rosa Honkonen), Lenni’s hip-hop dancing classmate, is pregnant with his child. Lenni joins a sports training group to escape his everyday emasculation, but when this organization reveals itself to be a far-right group responsible for several hate crimes, he becomes captivated by its iron-willed members and their leader Janne (Ville Haapasalo). Though Lenni regularly exclaims racial slurs even before he meets the men, Vilhunen differentiates his xenophobia by focusing on the boy’s timid fidgeting and subdued presence. As the title proclaims, Lenni is only a stupid young kid with a vulnerable heart, and not at all a complicit participant in the far right’s increasing hold on Finnish society.

In attempting to dissect the psyche of a prepubescent white nationalist, Stupid Young Heart sacrifices critical distance for pure subjectivity: a fictive world where everything revolves around Lenni’s inferiority complex, and those occupying the margins of Finland’s social hierarchy are even further marginalized. Non-white immigrants only appear during altercations that exploit their suffering for Lenni’s wide-eyed gaze, as he begins to recognize the perils of his ways at a snail’s pace; meanwhile, Kiira’s impending motherhood only functions as a guilt-inducing reminder that Lenni only has nine months to become a better man. That this daunting task is only possible through the far right produces a twisted, roundabout argument that whites can unlearn racism by witnessing (or even participating in) its violent extremes, walking an invisible tightrope between varying levels of bigotry.