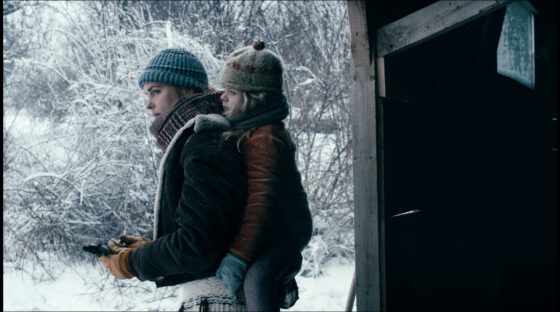 Early in Katrin Gebbe’s Pelican Blood, an abrupt edit takes the viewer to the scene of a clash between police and rioters. Smoke hangs in the air and the mounted police struggle to control their horses. After a moment it becomes clear that the scene is being staged: the rioters are only a handful, and the group are within the enclosures of the stable run by Wiebke (Nina Hoss), a horse trainer supervising this test of their steeds’ conditioning. The rupturing of the stable’s tranquil morning with a fabricated scene of political violence indicates a film attuned to image-making. Wiebke, already a single mother to Nicolina (Adelia-Constance Giovanni Ocleppo), seeks an adoption in Bulgaria and brings home Raya (Katerina Lipovska), a sweet-seeming child who gradually reveals a blunted sense of empathy and tendencies toward violent behaviour. Initially seeking counselling and cognitive therapy, Wiebke runs through her options until her approach takes a turn for the mystic. The effort to tame Raya — or, as the therapist suggests, reawaken the sense of empathy that was blunted in her traumatic infancy — initially sees a contrast in the training of an unruly horse, Top Gun, who seems ambivalent about the officer paired with him. While Top Gun is made to endure artificial riots and obstacles like fire and glass, Raya creates similar hazards within the home, to the mutual endangerment of her adoptive family. This environment collapses in a second half that discards the thoughtful if obvious dialectic of the early scenes in favour of a climax that draws on primal symbolism: the sacrificial mother and the feral child. The haunting stillness of the final moments is weakened by the cleanness of the ending; no fire is so easily extinguished.