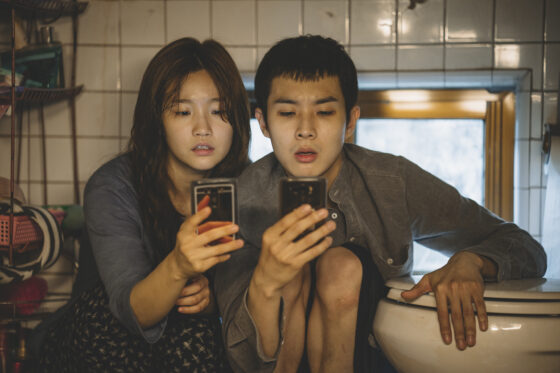 Precisely a decade after his last film shot and produced in South Korea, Bong Joon Ho returns to a place that feels both familiar and unfamiliar with his Palme d’Or-crowned Parasite. Moving beyond the ambitious, overly conceptual, and uneven international co-productions Snowpiercer and Okja, Parasite feels like a movie that only could have been made after such an awkward foray into globalized filmmaking. Slipping comfortably back into his domain with effortless mastery and a palpable sense of urgency that makes for less of a homecoming than a home-reckoning, Bong builds on his thematic obsessions of class division, societal dysfunction, and the family unit, yet does so in a perpetual state of surprise. Twists and turns aside, this surprise comes more from Parasite’s very make-up: the formal strategies, tonal malleability, and sheer density of the film’s intricate construction. Needless to say, Parasite is the most deserving Palme winner in quite a while, and its arrival at this year’s edition was explosive, leaving nearly everything else in its dust.

The premise is simple, though the execution far from it: a poor family of four—Ki-taek (Bong regular Song Kang-ho), his wife Chung-sook (Chang Hyae-jin), daughter Ki-jung (Park So-dam), and son Ki-woo (Choi Woo-sik)—live in a dank basement where they have to raise their cellphones to the ceiling to steal nearby Wi-Fi signals, routinely see a drunkard pissing outside their window, and fold pizza boxes for a local delivery joint to scrape together enough under-the-table money to make it through another day. (When fumigators on the street are spraying for bugs, Ki-taek leaves the windows open to take advantage of some “free extermination.”) So when Ki-woo hears about a rich family seeking an English tutor for their teenaged daughter, he cons his way through an interview to secure the gig.

This is when we’re introduced to their counterparts, the Parks, an affluent family of four who live in a gorgeous modern home, which we’re often reminded is the work of a revered architect. Fortunately, Mrs. Park is, to put it lightly, rather gullible, and in a comical domino effect, the members of the lower-class family infiltrate her home by convincing her to offer them one ill-suited job at a time: art therapist, driver, and maid (the latter requires some particularly dastardly methods that will not go unpunished). Astonishingly, they thrive in their respective occupations and quickly earn the rich family’s trust. As they settle into their new home away from home, it’s clear their goal is not to indulge in luxury but to escape an overwhelmingly anxiety-ridden daily life.

Their impossibly clever scheming is detailed with great humour; it’s hard not to fervently root for their Teorema-esque takeover. However, while the clan in The Host comes together to fight the titular monster, the trajectory here is a tad murkier. Parasite complicates and upends the dynamics every step of the way, moving from gig-economy satire to class-rage-fuelled tragicomedy that manages to frame each character, rich or poor, in a morally ambiguous light, laying bare the fissures created by a system that depends on ignorance and division to perpetuate itself. The seemingly banal setup is a put-on peeled away bit by bit that eventually places us somewhere between devastation and discomfort. That it’s so much fun to get there is a testament to Bong’s dexterity as a storyteller, preferring to entertain viewers and lull them into a simple relational position only to pull the rug out from under them.

Parasite finds Bong reunited with cinematographer Hong Kyung-pyo, who shot both Mother (2009) and Snowpiercer (and, notably, Lee Chang-dong’s Burning [2018]), but the look they develop is here entirely distinct from their previous work. They have a field day in constructing, revealing, and expressively playing with space: the already contrastive domiciles are especially pointed, with wide compositions emphasizing the cramped nature of the basement apartment and its intruding walls and obstructions versus the wide-open space of the modernist house. The Park residence is like a world unto itself, defined best by its living room with its wall of windows looking onto an idyllic, sheltered backyard, an illusory viewpoint we observe from both sides: from the outside, the immaculate home appears as the receptacle for an idealized, commodified dream life, while from the inside it’s an insular bubble completely divorced from the surrounding real world. However, a hidden bunker and its contents puncture through said bubble…with a vengeance. Indeed, Bong’s films are markedly filled with subterranean spaces, sewers, basements, and hovels—even the horizontally oriented Snowpiercer’s most pivotal reveal lies underneath the floorboards.

The key touch here is that amidst all the struggles Ki-taek’s family undergo, their rich counterparts never have to check their privilege or even display a hint of class consciousness. No matter how they figure into the goings-on of the plot, the Parks remain oblivious to the circumstances of the underclass, whose servitude and poverty enable their lifestyle (though they seem keenly aware of their smell). And yet Parasite is a film without villains: there are no shortcuts to make us side against the rich family, and the glimpses of their own internal dramas are shaded with empathy. No hands are clean, and we’re reminded that when you’re climbing the social ladder, you need to step on someone else on a lower rung.

Bong majored in sociology before he pursued filmmaking, and his movies are organically built on a foundation of social reality, beginning with the characters, their relationships, and how they are impacted by and react to external forces—usually embodied in monsters, murders, and governmental or corporate corruption—that hyperbolize societal ills. Remarkably, it feels as though every shot and sequence is always directly relating Bong’s characters to the world and the larger implications of their surroundings. In other words, every gesture feels thematically expressive, even as the narrative mechanisms take centre stage. In spite of the specificity of the urban South Korean milieu being explored here, this tale of economic disparity, social polarization, and human desperation is all too universal.

The title seems simple enough at first glance, describing the dynamic between the underclass protagonists and the targeted family (i.e., “The Host”) they live off, but, by the end, everyone is shown to be equally parasitic: the rich live off the labour and suffering of the poor, and the poor and the even poorer viciously feed off each other to survive. With furious anger wrapped in delirious formal and narrative pleasure—call it service with a smile—Bong has delivered a clear-eyed capitalist critique that, in spite of its oft-tread upstairs-downstairs territory, articulates the toxic nature of an invisible system’s manifestation in human behaviour. Most impressively, Parasite does so without the slightest bit of moralizing, and in allowing its characters to be so messily human, shatters barriers separating genre and allegory, giving us a tragedy for our time.