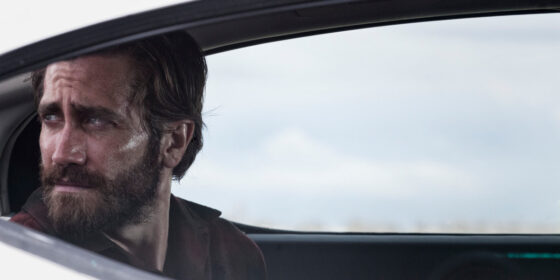 A bunch of naked, pudgy woman are dancing in a very glamourous and sensual way, flaunting their adipose imperfections. More than a Tom Ford movie, this frankly seems like the beginning of ein film von Ulrich Seidl. For a man of such fashionable taste and background, the sequence is provocative and disturbing. Is this a bold new statement for Mr. Ford?

Yes and no. The originality stops somewhere around there; what follows is a well-crafted psychological thriller (a noir-western thriller, even!) with eclectic storytelling and visual style, clearly inspired by other movies by more talented filmmakers like Michael Haneke (Funny Games), the Coen brothers (No Country for Old Men), David Lynch, and Brian De Palma. A wealthy, classy woman (Amy Adams) is fed up with her comfortable life; she is just as unhappy as she is rich, and it is hard to take her weltschmerz seriously until she receives a special package: an as-yet-unpublished book written by her first husband and first love (Jake Gyllenhaal) entitled Nocturnal Animal. From the moment Adams starts reading the text, Ford offers us two movies for the price of one: the literary drama of a father searching for justice after a cruel tragedy intersects with the main tale of a single woman who has caused hurt and now stands hunted and insulted. In both cases, what is sent out into the world returns. Ford wants to make sure that we understand the interplay between fiction and reality: one of Adams’ rich gay friends explains that “our world is less painful than the real one.” But here’s the thing: as viewers, we couldn’t care less.

It seems that Ford s haute couture version of the cinematic experience is ready to evolve and get dirty in the “genre” department: this time there will be blood and a lot of violence in the middle of the desert, with the requisite masculinity and testosterone embodied by the charismatic Aaron Taylor-Johnson. The film is also (and more on purpose than not) funny, especially the western-styled antics of theat ultimate show-stealer Michael Shannon. But despite all this, and the fulsomeness of Ford’s cinematic reference points, one can’t avoid the feeling that something crucial is still missing.