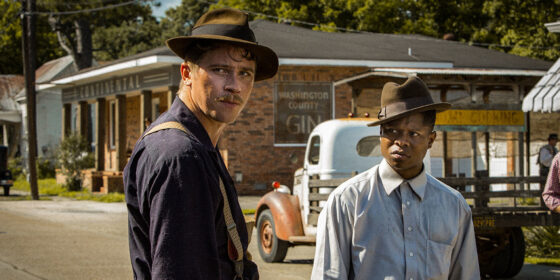 A period piece set in 1940s Mississippi, Dee Rees’ Mudbound takes the form of a low-key epic about race relations in America, counteracting its mid-sized budget with a sprawling narrative structure. Henry McAllan (Jason Clarke) and his wife Laura (Carey Mulligan) purchase a farm for their family, part of which is leased by Hap Jackson (Rob Morgan) and his wife Florence (Mary J. Blige). On the surface, the two families have little in common aside from the land itself, as well as family members off fighting in the Second World War; Henry’s brother Jamie (Garrett Hedlund) serves as a fighter pilot, while Hap and Florence’s son Ronsel (Jason Mitchell) drives a tank in Europe. When both men return from the front and form a friendship over their shared experiences, racial tensions between the clans go from a light simmer to a raging boil.

Adapting Hillary Johnson’s novel of the same name, Rees and co-writer Virgil Williams keep the source material’s design in place, hopping back and forth between the perspectives of all six major characters making up the strange yet unremarkable ensemble. The purpose of this patterning is clear: by comparing their individual desires and struggles, the film explores the universal, human qualities uniting these characters, as well as the external forces keeping them separated. It’s an ambitious and admirable effort at a message of unity by Rees, but the structural juggling act spreads things too thin, forcing overlapping storylines into small, narratively pat chunks. The easy, familiar narrative beats, culminating in a melodramatic and predictable conclusion (one that loses its impact by Rees using the tired device of opening her film with a flash-forward), conflict with the attempt to cover such complex thematic ground. Much like its characters’ inability to break free from the racial and social barriers surrounding them, Mudbound finds itself unable to transcend its own conventions.