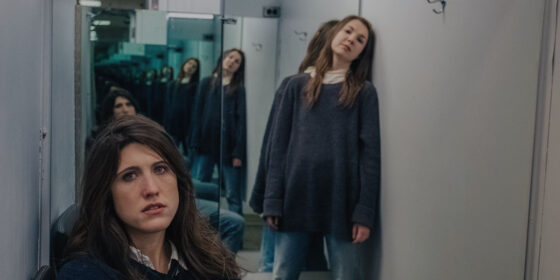 One idea has persisted in film culture for nearly 75 years: that of the “auteur” as a lone genius who not only directs his [sic] films, but also conceives of and writes them himself. The results on the ground of this notion have been, shall we say, mixed. Take, for example, Olivier Assayas’ verbose new movie Non-Fiction, whose hand-wringing on the subject of “print vs. digital” confidently lays claim to two hours of our time but teaches us little that is new about the subject. Seeking out one or more co-writers who might have brought something different to the material—say, in terms of age, gender, race, or class—might perhaps have given this work the freshness and enlivening it so badly needs.

Toronto-based director Patricia Rozema’s new film Mouthpiece makes for a useful contrast with Non-Fiction. Assayas and Rozema share certain biographical similarities: they are both in their early sixties, and made their first feature films in the mid-1980s. Instead of developing and writing her new film herself, Rozema reached out to two women in their twenties, Amy Nostbakken and Norah Sadava, to collaborate with and adapt their award-winning indie stage play (also called Mouthpiece). The film, which does not bear a great resemblance to anything else in Rozema’s filmography, features as its central conceit a protagonist, Cassie, who is played by two women; as in the original theatre production, Nostbakken and Sadava take on the role themselves. The premise is simple: at the start of the film, Cassie learns of the death of her mother (Maev Beaty), with whom she had a deeply ambivalent relationship, and struggles to author a eulogy for her.

This grim set-up, however, gets an unexpectedly eccentric and playful treatment. A comic-absurdist sensibility suffuses the whole enterprise: there are musical sequences in unlikely settings (a church, a grocery store), and the two actors who play Cassie often essay their roles as if they were in a knockabout farce. Rozema has spoken in interviews about her inclination, throughout her career, to shy away from the documentary aspects of film and embrace overt artifice and stylization. (She has a special affinity for the Theatre of the Absurd: she once adapted Samuel Beckett for Irish television, and cast Harold Pinter in her film version of Jane Austen’s Mansfield Park.) She has also characterized Mouthpiece as “Lena Dunham’s Girls meets Charlie Kaufman”—to be honest, the final result does not really evoke either, but it is pleasingly energetic and whimsical nevertheless.

Its comic hijinks notwithstanding, Mouthpiece has a serious side. At the root of Cassie’s mixed feelings towards her mother is a feminist anger at the latter’s unfulfilled life. In the film’s most moving line, Cassie—an aspiring writer, like her mother was—confesses that she never wrote a single line without imagining how a man would react upon reading it. Generations come and go, but the struggle of a woman to transform herself from object to subject seems to get no less difficult. A feminist impulse, it turns out, animated the film’s production as well: around the time she was making Into the Forest (2015), Rozema promised that all her future work would feature female lead characters. Mouthpiece stays true to her word, and also features a behind-the-camera creative team—cinematographer, editor, production designer, costume designer—entirely comprised of women. The collective and collaborative nature of the entire project from start to finish cries out to be viewed as a counter-model, a rebuke, to the “lone male auteur genius.” It is an object lesson that, for me, may be the most valuable thing about this movie.