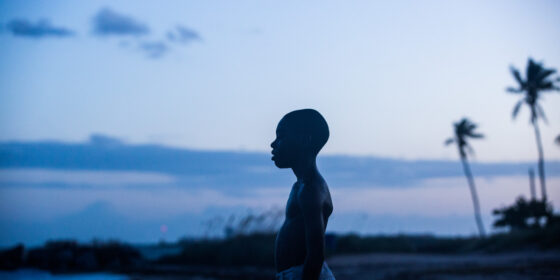 “No place in the world ain’t got no black people,” Mahershala Ali’s good-hearted drug dealer and surrogate father Juan tells prepubescent Chiron (Alex Hibbert) in the opening act of Moonlight, Barry Jenkins’ accomplished but fussy sophomore feature. Juan’s attempt to instill a sense of black masculine pride in a boy mercilessly teased for his still undefined sexual identity and shabby home life (mom Naomie Harris is one of Juan’s loyal customers) mirrors Jenkins’ own effort to offer a queer black answer to humanist epics like The Tree of Life (2011) and Boyhood (2014), which make the face of the white straight male adolescent seem universal. He’s mostly successful in this project, finding real pathos in the delicate performances of the three young men tasked with playing Chiron (or Little, or Black, which he prefers to be called in the opening and closing parts) at different phases of his life, as he either tentatively embraces or denies his feelings about other men, which complicate the mixed messages he keeps receiving about how to be a black man in this world.

Though the trio of Chirons (Hibbert, Ashton Sanders, and Trevante Rhodes) is fine, and though their cumulative journey from Florida to Georgia and back again makes an affecting study of stasis and change, the trick of recasting the character for each phase of his development does more harm to the actors’ collective performance than good. Perhaps inevitably, given the universalist register, it reveals a hazily sketched protagonist whose few defining traits—sullenness, choked rage, and repressed desire—are played in three pleasant but separate keys. That might be the point, given that Jenkins is clearly interested in the inconsistencies of character that find people who knew Chiron in his youth asking him just who he thinks he is as an adult, as if he were in an Alice Munro story about a young person in transition. Or it might simply be that Jenkins is better at plotting an ambitious, conceptual narrative tryptic, complete with onscreen titles and numbered sections, than he is at filling it with more fully realized characters.

Whatever the case may be, Jenkins can certainly direct. An awards-season player that knows what it is, Moonlight is a calling-card film that ought to fill up a lot of people’s dance cards in the years to come— not just Jenkins but also playwright Tarell Alvin McCraney, whose lyrical work the film is based on, and cinematographer James Laxton, who shouldn’t have to shoot any more Yoga Hosers after this. Jenkins’ ambitions to that end shouldn’t be held against him, but his desire to hit a lot of disparate aesthetic marks doesn’t always serve the film well. A repeated, dreamy motif that sees Chiron’s mother either entering or exiting a lurid pink den as he stands frozen in front of her feels arty in the most detached way, and a late-film playback of Caetano Veloso’s cover of “Cucurrucucú paloma” doesn’t evoke the doomed love stories of Talk to Her (2002) and Happy Together (1997) so much as crib from the films’ respective soundtracks.  Still, as a melancholy character piece about an inarticulate young man who can’t quite become himself no matter how many permutations of his image he puts out into the world, this is strong stuff.