Meditations in an Emergency: The 2012 Robert Flaherty Seminar 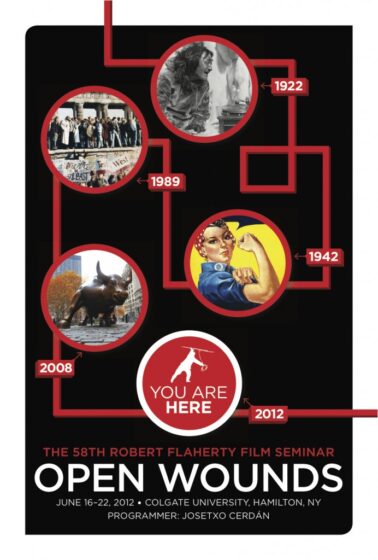 In founding the Robert Flaherty Film Seminar in 1955, Frances Flaherty paid tribute to her husband’s memory with an informal colloquium that would extend their guiding principles of immersion and “non-preconception” to the viewing of films. The week-long seminar has long since outgrown the Flaherty farm (the last several have taken place at Colgate University), but it retains the congenial atmosphere of a summer camp. A programmer is announced ahead of time; the featured filmmakers are not. The assembled congregation of academics, curators, enthusiasts, artists, and critics enter each of the day’s three screenings without knowing what’s coming down the pipe.

The idea of cinema as open wound had special currency at Flaherty, where there is a long tradition of interrogating filmmakers’ intentions. Ben Russell must have had this history in mind when he admitted during a discussion late in the week that he arrived at the Flaherty expecting to be the “sacrificial lamb.” Indeed, the reflexive distrust of ethnographic description and oversimplified schism between formalism and social activism converged upon Russell’s Trypps. He acquitted himself admirably in the Q&As, performing some of the same operations as his films by at first frustrating questions only to double back, illuminating audience assumptions. Several attendees seemed unable to resist the temptation to write Russell off as an art-school kid run amok, but his repositioning of critical ethnography nonetheless widened the discussion of what does and doesn’t constitute a challenging film.

At one point Russell offered that his films were meant to be “radically pleasurable,” and Cerdán’s program gave ground to this embattled position with more playful gestures and dreamlike images than one would expect given the Flaherty’s nonfiction mandate. To take a more popular example, Latvian filmmaker Laila Pakalnina’s Three Men and a Fish Pond (2008) turned the tables on anthropomorphism and was met with extravagant laughter—partially the result, one assumes, of social discourse relaxing at the sight of animals (you might have thought Sweetgrass was a Marx Brothers movie from its reception at the 2009 seminar). Superbly edited to distill the common idiosyncrasy of the animal kingdom, Pakalnina’s witty montage revealed its existential acuity, passing over a human funeral with no more emphasis than a bird diving for fish.

Rivers’ films met with more resistance, their tactile pleasures trampled by repeated calls for more context. The emergent nature of Rivers’ montage suggests an alternate route to meaning for those attentive to it. (Poetry, according to the 11th-century epigraph of A.C. Graham’s Poems of the Late T’Ang, “should be precise about the thing and reticent about the feeling, for as soon as the mind responds and connects with the thing the feeling shows in the words”). Rivers’ work-in-progress The Creation as We Saw It, shot in the Vanuatu islands, made for an especially stimulating pairing with Flaherty’s Moana (1926), shown here with the accompanying recordings Flaherty’s daughter Monica made with Richard Leacock in 1970s Samoa. Autonomous sound loosens the indexical bonds of the image in both films, though while Flaherty’s dramatizations of ritual and curiosity are ever florid, Rivers moves the exploratory approach towards a more provisional understanding of reality. At the end of Ah, Liberty! (2008), Rivers’ fluid ode to child’s play, the intimate image of a roaring fire gives way to a distant composition with the same fire swallowed in the dark of the anamorphic frame. Open sesame: the spreading darkness is a visual analogue for the mental space Rivers taps with the fire’s primeval presence—an elegant model for the interplay of image and imagination that is cinema’s beating heart.

Ah, Liberty!’s evocation of freedom was unexpectedly mirrored by the charged spatial dynamics of Sylvain George’s epic odyssey of African immigrants in the French port of Calais,  Qu’ils reposent en révolte (des figures de guerres) (2010): similarly monumental plays of figures in landscape reflect diametrically opposed states of being. This was only one of the many productive dialectics running through Cerdán’s program (Another: George’s portraits of African immigrants charring their fingertips in a radical attempt to elude identification preempted Flaherty’s disquieting depiction of Samoan tattooing rites.) Jay Kuehner has already written perceptively about George’s film for this magazine, but suffice to say that its hard-earned solidarity provided an anchor in a program otherwise given to eccentricity. George’s extraordinary arrangements of embedded experience in a no man’s land pitched between London and Paris reveals a war where others might only see a social problem. Several of the men raise the ghost of Frantz Fanon in their diatribes for George’s camera, and George makes their rage the film’s own by allowing the tightly composed shots to run well past the point of sympathy.

The French auteur similarly defers to the visionary power of inflamed political speech in the more theoretically oriented L’Impossible – Part V (2009), a self-described “ciné-tract” shown later in the week. George, who was born in 1968, hurls Guy Hocquenghem’s bitter denunciations of the French Left’s mortifying embrace of power with help from Richard Hell, free jazz, found footage of gay rights marches—anything to get the ball rolling. Elsewhere, the grainy footage of an unknown Paris coming to life in George’s No Border (2008) harkens back to À propos de Nice (1930) as it rehearses revolutions to come.

The captivating energy of political demonstration provided a more elusive succour in Andrés Duque’s Dress Rehearsal for Utopia. Like a smartphone-shot The Tree of Life (2011) with a greater sense of levity, the film tracks an interior journey through the passage of mourning. Unbound from chronology, Duque collages material shot in Mozambique and Spain, found footage of bygone revolutions, and intimate portraits of his father’s last days in Venezuela. The logic of the migratory images is that of one newly orphaned in the world, and it was especially striking in the American context to see a personal essay dwelling upon silence rather than voiceover for its narration. The grace of dance is the film’s golden thread—it’s there in the slowed movements of hip hop kids, the revolutionary soldiers’ lockstep, a father’s fragile “first steps” (the parent-child relationship flipped just like that), and a sublime bit of Situationist slapstick that provides a fresh opening where others might look for closure.

During the seminar’s final discussion, Cerdán remarked that he designed the program in part to address the historical question of what has succeeded the self-conscious moves towards reflexivity and identity politics characterizing the non-fiction cinemas of the 1980s and 1990s. In the case of filmmakers like Duque, George, Rivers, and Russell, the renewed interest in cinema’s ontology and its attendant capacity to inscribe viewers into alternative social realities suggests a shift away from deterministic conceptualizations of film form. The evolution could be traced more literally in Lourdes Portillo and Friedrich’s turns to video production and humour. The two Friedrich features shown waged impressively sustained comedies of complaint, though both were ultimately hamstrung by a tendency toward cliché (16mm gardening and cooking balancing the video nightmares of health care in The Odds of Recovery) and banality (too many to count in Gut Renovation, a litany of gentrification grievances).

Portillo’s more recent satires of documentary filmmaking (My McQueen and Al Más Allá, both 2004) seemed imprecise after her tour de force, The Devil Never Sleeps (1994). As with Alan Berliner’s Intimate Stranger (1991), a glamorous older relative’s death leaves the filmmaker in an epistemological quandary amidst a chorus of family members. Not least of The Devil Never Sleeps’ border-crossing virtues is its prescience in excoriating the endemic lack of justice revealed by Portillo’s Mexican uncle’s enigmatic demise. The significance of Portillo’s quixotic onscreen persona is most apparent when she speaks to her uncle’s widow on the telephone. The woman refused to appear in the film, presumably because she knew the rest of the family would cast her as the story’s femme fatale, and Portillo’s self-portrait of herself as the overreaching investigator owns up to ethical perils with a jester’s grin. Along the same lines, her amusing layering of telenovela motifs throughout The Devil Never Sleeps suggests a deeper insight into the documentarian’s liability: that the desire for truth can be so overpowering as to become a lust for lies.

Portillo’s embrace of disorientation as a potentially enlightening position from which to practice documentary reverberated across the rest of the week. With many of its featured artists engaged in projects overflowing the contents of a single film, Cerdán’s program favored deviation to the rule, obsession to caution. Indeed, his incorporation of so many distinctive and at times contradictory models of committed filmmaking reflected a genuine commitment to the Flaherty watchword: Onwards.