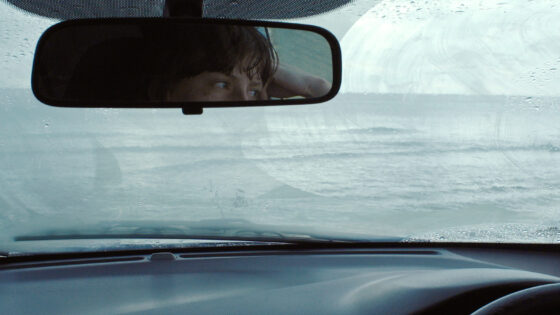 Creation myths have a suspect, anthropocentric charm—supposedly, the cosmos heaves, slow and indifferent, until one day, it makes itself amenable to human narration. In Helena Wittmann’s debut feature, Drift, a woman (co-writer Theresa George) shares such a story, abbreviated from Papua New Guinean lore, with her friend (Josefina Gill): a giant crocodile paddles back and forth in primordial muck, until a mythical warrior appears unbidden and kills it. Without the crocodile’s seismic disruptions, the muck sediments, separating earth and water. When the women part ways—one homebound for Argentina, the other set for a solo trip across the Atlantic—dialogue vanishes, along with any gestures toward narrative intelligibility. In their absence, Wittmann turns to the still-primeval sea.

More than anything else, Drift is filled with shots of the ocean in all its different guises: gentle swells in its daylit blues; the black-glass rush of night-time waves edged with foam; twice, the full moon blazing a lone dappled path along the water, gleaming like a cliché. If structural film—to which Wittmann makes a few nods—tasked itself with feeling out the form of a medium, Drift asks what film can do with the shape of the sea. Its perpetual motion buoys the bobbing camera, but unlike the frantic enterprise of Lucien Castaing-Taylor and Véréna Paravel’s Leviathan (2012), all fish-hauling and net-casting in a frenzy of rough hands at work, Drift removes human centrality to the point of abstraction. It’s not quite a return to the waters before time in ancient myth, but rather a quiet collocation of spectral movement and the suggestion of an other than: the ocean is other than the structures of easy allegory imposed on the indifferent lurching of the waves, other than a search for its depths or the profiteering ends to which we subject it.

Though the film is bookended by scenes of relative stasis, the two women rarely stand still, biking across busy streets and bridges or watching the roadside blur on a bus ride through town. The everydayness of these urban spaces feels like a counterpoint to the landscape shots that break up footage of the sea: a long take shrouded in dense mist gradually reveals animals grazing on a slanted plain; trees quivering in the wind cut to a tangle of dark branches, wrapped in fog and lichen. Later, a patch of thinly clouded sky teases with a false echo of the mist, as though planting misplaced hope for similar revelation. It seems a central part of Wittmann’s inquiry, and one that’s shared by the many projects that come from initiatives like Harvard’s Sensory Ethnography Lab, is the extent to which the ways we render landscapes legible—figuratively, literally—come at the expense of what they are without us. In the long shot of a wide, rocky terrain, Theresa’s faraway figure becomes a point of identification. Human presence anchors the images, though Wittmann uses the possibilities of film to suggest that, maybe, it shouldn’t.

Crucial to Drift’s evocation of place is Nika Breithaupt’s remarkable sound design, which signals movement and spatial boundaries as much as do the film’s visuals. In the city, sounds of traffic flare and fade abruptly, fleeting noises that mark endless encounters with different spaces in transit. Deep in nature, it’s a different story: a shot of ferns in the dark is paired with constant nocturnal bird calls; footage of the sea is set to churning waves or the unchanging glissando of a boat through water. Theresa and Josefina roam across city and sea, but the steadiness of Breithaupt’s nature samples suggests perpetual movement of an ecological kind. Occasionally, diegetic ocean sound is replaced by an ominous synth; sometimes, by nothing at all. After the soothing union of audio-visual diegesis, shots of the varyingly mute and ventriloquized sea lift images to another plane of illegibility.

In a move that restates its concern with the contingencies of perception, Drift’s final scene echoes the end of Michael Snow’s Wavelength (1967), a 45-minute continuous zoom that refashions the visual field as a horizon of determined possibility. Here, it’s incarnated as an eight-minute creep across Theresa’s kitchen as she sits by the window, Skyping Josefina from her home in Buenos Aires. At one point, Theresa gets up and begins to go about her day, roving around the sink while the Skype window remains open. Josefina, too, is now preoccupied in her pixellated elsewhere, the two women sharing fractured screentime across false space, bound more by their banal inhabitation of routine than technology. As in Wavelength, Wittmann’s camera zooms slow and steady to a picture of the sea on the other side of the room, gradually excluding all but simulacral waves from the frame. Were we ever at sea?

Perceptual questions also drive Sofia Bohdanowicz’s short The Soft Space, which is comprised of fragmented close-ups on body parts—dark-lashed eyes, feet crossed at the ankle, the detail of a knee—intercut with shots of subway stairs and tunnels. The sounds of transit persist across all footage: close-up lips are set against the screech of wheels on old tracks; the bare nape of a neck is paired with the rapid-fire turnstile clicks of rush-hour commute. Bohdanowicz is no stranger to the intimate camera, as her attentive portrait in last year’s Maison du Bonheur shows, but The Soft Space uses montage as means of dislocation, the tenderness of a close body interrupted by the hard edges of public transit.