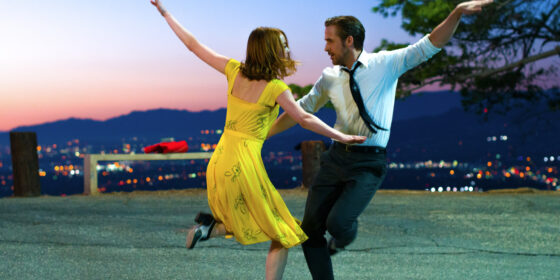 Alfred Hitchcock once said that a “good film should start with an earthquake.” Damien Chazelle must have kept that in mind, because La La Land  kicks off with a bang, an energetic musical sequence that transforms a Los Angeles traffic jam into the coolest place on earth, a modern-day fantasy variation on Weekend (1967), appropriately shot in a single Godardian long take.  The impossible becomes possible, but there are still some people on the ground that are “dragging and rushing” (to quote J.K. Simmons’ Oscar-winning Whiplash villain), chiefly Mia (Emma Stone), an aspiring actress, and Sebastian (Ryan Gosling), a jazz musician clueless about his future. Dreamers and outsiders both, they are clearly a match made in heaven, and when they dance together, they’re like poetry in motion.

Chazelle’s film is about love, but it’s also about something less romantic: it’s about learning how to compromise and to grow up, how to swallow humiliation, and all the things that get left behind in the process. The conceit of California as a place where a person cannot distinguish between winter and spring becomes a suggestive background for a generation that seems lost en route to true self-determination—there is no map showing the way from “La La Land” to the real Los Angeles. The characters are stuck in their dreams, like rebels without a cause—and Chazelle shows them watching Nicholas Ray’s movie together.

There are other Old Hollywood homages too, and yet while the musical numbers are amazing and fresh (and filled with nods to Gene Kelly and Stanley Donen), they’re not simply eye candy. La La Land shows the ambition of Whiplash meeting the melancholia of Casablanca. There, Humphrey Bogart had to make a fateful decision about his beloved’s faith, and the same thing happens here. Chazelle doesn’t just reference Curtiz’s classic—he updates it for a generation too realistic to decide that they’ll always have Paris in the end. The final sequence leaves you spellbound, reflecting our own desires back at us, which is the essence of cinema. La La Land may look like the world that we dream about, but it also understands the cruelty that can come out of (or undermine) those dreams. The film is happy, but without a happy ending; it’s shot in CinemaScope, and yet it’s still an intimate masterpiece.