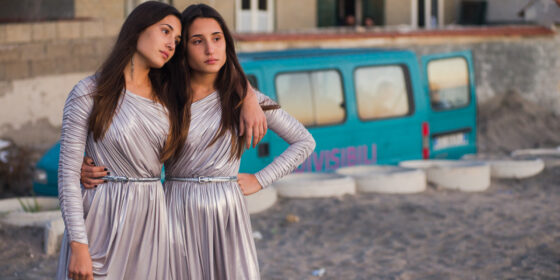 In all of this three feature films Eduardo De Angelis goes back to his roots in his homeland in southern Italy, and discovers a new side of Naples and its surroundings. In Indivisibile, Castel Volturno appears as a more poetic version of Gomorra, a no man’s land of weird saints and fake miracles forgotten by God (who is searching for a new religion). De Angelis is simultaneously analyzing and tackling the archetypes of the Italian family, still seen as an immaculate monument to pray to, and in doing so encroaches on the territory of Paolo Sorrentino and Matteo Garrone (who have monopolized it in recent years).

Two teenaged Siamese-twin sisters are physically bound to each other; endowed with beautiful voices, they become musical favourites within the community, singing at baptisms, communions and weddings. People touch their conjoined flesh to conjure feelings of mercy and hope, but the girls resent their dysfunctional lives, in which their parents treat them like an ATM machine, generating Euros in times of financial crisis. And unsurprisingly, they yearn to grow apart, literally and figuratively. An expensive plastic surgery offers the possibility of a new start—and a fight to see what it truly means to be free (and independent).

To Sophia Loren’s waist and Maradona’s crafty hand, we add a new list of wonders: the starring Fontana twins, Angela and Mariaana, who count as a major discovery. Their beauty, innocence and bravery in existing outside the box in a country suffocated by a tradition of “Great Beauty” is significant; the characters they play are perceived as freaks or weirdos, and yet De Angelis presents them as the most human element in a world whose normal surfaces are filled inside with ugliness, perversions and mendacity. Grotesquerie is at the core of Italian DNA—from Dante to Pirandello, a paradoxical mix of comedy and tragedy (and beauty and ugliness) defines this trope. De Angelis’ film affirms this tradition, offering redemption rather than punishment, and offering several powerful variations on the theme of freedom.