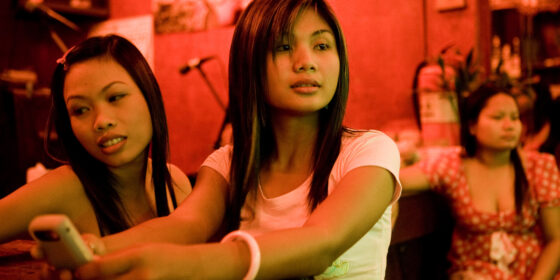 Hidden in the grassy seaside of northwestern Jutland, the matronly Sommai has arranged for hundreds of marriages between Thai women and Danish men for more than 30 years. Between 2007 and 2018, documentarian Janus Metz (Borg vs McEnroe) and anthropologist Sine Plambech (Trafficking) closely followed Sommai and her construction of a migration pattern fortified by desire: Danish men’s longing for “Thai wives,” and the women’s hope to “have children with a foreigner.” The pair’s latest film, Heartbound, completes their decade-long project with the introduction of a second generation, and their coexistence with the continual cries of the homeland. But though the population of wives increases to a baffling 900 people, Heartbound’s whimsical humanism eclipses the pushes and pulls of the global agents that facilitated their arrival.

The second part of the film incorporates footage from Metz and Plambech’s Love on Delivery, about a sex worker who marries a Finnish client and sends money to her two sons. In Heartbound, sex tourism is mentioned only briefly, a barely-there spectre that avoids the well-trodden path of sensationalist moralizing. Plambech, who studies human trafficking in Thailand, has written before that migration and debt are intertwined, though the connection is rarely addressed because it is “dry and boring.” But rather than devote thorough attention to finances—earned to sustain families and escape sex work—Heartbound belies its nuanced portrait of a gendered phenomenon with the provocative question of whether or not a coupling built upon a transaction could truly result in love.

Even when filtered through this abstraction, the film cannot erase an imbalance of power: of Heartbound’s ensemble, those most affected by lovesickness are elderly white men; the women are instead homesick. Though its plucky strings and weepy embraces between interracial couples and their children belabour one man’s claim that “the human world is strange and messy,” the women’s undeniable lack of agency instead better proves the words of Rainer Werner Fassbinder: “Love [is] the best, most sneaky and effective instrument of social oppression.”