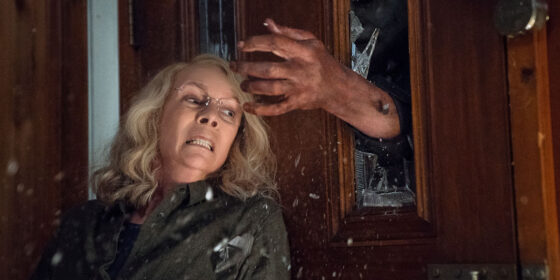 The story goes that director David Gordon Green approached Jamie Lee Curtis with an idea for a Halloween sequel she apparently deemed too good to pass up: toss out the 40 years’ worth of sequels, and make Laurie Strode’s return to the screen a direct continuation of John Carpenter’s 1978 original. Green’s Halloween (the second verse is same as the first, sure to confound collectors of physical media when it comes time to slot the DVD release into alphabetical order on their shelves) finds Curtis’ Strode as a hardened survivalist, forever changed by her encounter with serial killer Michael Myers when she was a teenage babysitter. When Michael escapes the mental institution to which he’s been consigned on Halloween night 40 years to the day of their last meeting, Laurie and her estranged daughter Karen (Judy Greer) and granddaughter Allyson (Andi Matichak) prepare for a final face-off with her own personal Boogeyman.

Green’s script, penned with Jeff Fradley and Danny McBride, dutifully hits most of the expected nods to fans of the franchise (some more successfully than others), and the callbacks continue with a new score by Carpenter himself and the return of Nick Castle as Michael (or “The Shape,” as he’s credited in the 1978 original). The latter move turns out to be a great one: a potentially hollow nostalgic ploy actually reveals Castle as the key to making Myers a genuinely terrifying spectre. None of the Michaels that have come since the first film have quite managed to combine physical menace with creepy, childlike fascination like Castle.

While some of the in-jokes and nostalgic mood-setting come off as a little too pleased with their own cleverness, the real effectiveness of this iteration of Halloween is the engagement with the franchise’s treatment of PTSD. Past sequels have dealt with Laurie’s various post-Shape afflictions as manifestations of trauma and the ability (or inability) to get over it. Green’s Halloween touches on this interpretation of Laurie’s mental state, and even adds the wrinkle of passing on her own neuroses to future generations. But in the end it smartly leans into the idea of Myers as a manifestation of pure Evil, and the ways such darkness can imprint itself upon us. Thankfully, the 2018 version of the Boogeyman is devoid of any supernatural backstory to explain his unnatural longevity: he’s a uniquely cinematic evil, who needs only the power of reboots, remakes, and sequels to be endlessly resurrected.