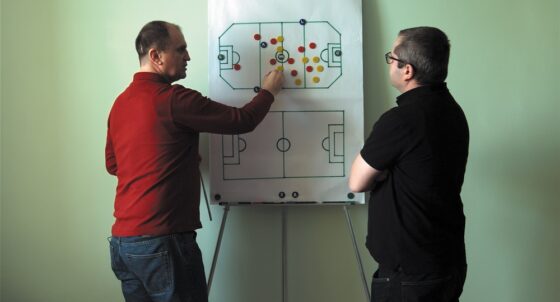 Corneliu Porumboiu’s new documentary, like The Second Game (2014), is again fixated on soccer. Infinite Football mostly consists of the director in conversation with his friend Laurentiu Ginghina, who has some ideas about how to give the beautiful game what he considers to be a much-needed makeover. First, we hear his tale of woe: an injury that ended his days on the pitch made him realize the rules of the game were insufficient to protect players like himself. His main ideas are changing the shape of the field to round out the corners and to limit the mobility of players with restrictions as to which part of the field each player can occupy: he claims this makes the game safer and keeps the ball moving, in turn making it more exciting. Porumboiu gives his friend a lot of room to make his case, but isn’t so convinced. Laurentiu’s earnest conviction makes him instantly endearing, but it’s also hard not to laugh at him, seemingly in sync with the film’s playful mockery. Laurentiu keeps adapting his proposed changes to address the flaws in his initial plan, and it’s not long before he seems to be pushing an entirely different and even less plausible set of rules. Porumboiu enlists some players and a coach to put theory into practice, with hilarious results. The less credence to the concept, the more we feel for Laurentiu, whose dreaming is inspired by how the game he loved both hurt him and was taken away from him.

When Laurentiu’s father bizarrely gifts a family photo to Porumboiu, pointing out the intricacies of his poetic eye before fervently analyzing a horribly kitschy painting on the wall, Porumboiu shows his hand, as what he has been evolving scene by scene is a humanistic tribute to armchair inventors and thinkers, shifting power from the filmmaker to the subject as creator. At first glance the film is deceptively sloppy and slight: inelegant mobile shots of conversation feel spontaneous, and indeed the director shot the film using a skeleton crew with little to no preparation. But Infinite Football is the best testament yet to Porumboiu’s genius, as he moulds seemingly artless parts into an unexpectedly profound whole. To this end, it calls to mind Jafar Panahi’s This Is Not a Film (2011), and, more broadly, other directors working freely and contentedly in modest modes, like Matías Piñeiro, Philippe Garrel, and Hong Sangsoo.