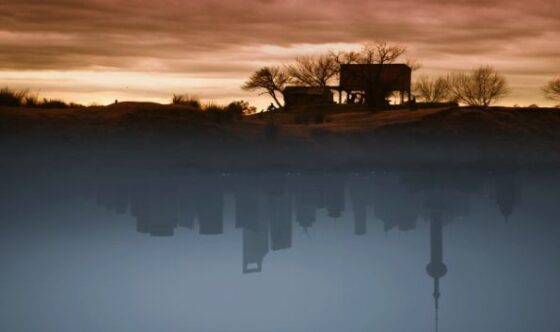 The value and importance of True/False Film Festival could be discerned within the first few hours of its ninth iteration. At the Forrest Theater, a copiously chandeliered ballroom-cum-screening room upstairs at the Tiger Hotel, the ten-story Jazz-age building that nevertheless towers over cozy Columbia, Missouri, a film premiered without a track record or advance word, a film with, as I later discovered, rejections from several major U.S. festivals under its belt, and yet proved to be one of the freshest and most assured debuts in recent memory. God (and apparently numerous foolish programmers) only knows why Only the Young, an ingratiating and entertaining profile of three suburban Christian skate-punks, hadn’t premiered on a bigger stage, but True/False has made a habit of presenting artistically adventurous documentary films in the best possible light. By the end of the four-day weekend, the pocket-sized festival’s nimble and ecumenical slate made those of the big brother festivals seem small—or at least small-minded—by comparison.

By Friday evening, when I sat down to see The Imposter, a very solid non-fiction thriller that had debuted at Sundance in January, my expectations had become fully inverted. After a day of rigorous, defiantly-paced observational studies like Abendland and The Argentinian Lesson, Bart Layton’s A&E Films production seemed too slickly put together, too damn easy of a sit. While True/False does a bang-up job of mixing out-of-leftfield premieres with select, hot-ticket poachings from Sundance (the sublime Detropia, the irresistible Searching for Sugar Man, and the thoroughly self-aggrandizing and frankly racist The Ambassador), the overriding culture of the festival—from its anything-goes view of the doc form to a subsection of unnamed, blind-item “Secret Screenings”—is one of communal discovery. In its own low-key, eminently approachable way, the festival succeeds in making ideal viewers of its audience, persuading us to respond to what’s on screen rather than what we project onto it. Thanks to canny storytelling and high production values, The Imposter goes at least some distance toward accommodating the viewer—which is hardly a sin, but in this context was also more than I needed. 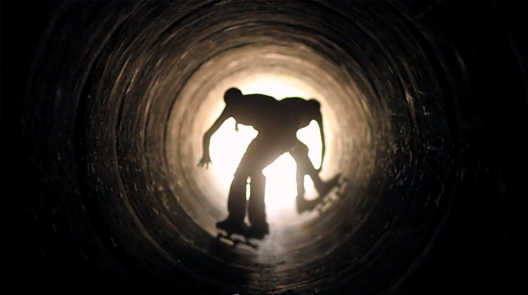 This year that sense of discovery extended beyond audience investment and formal experimentation and to the film subjects themselves, with a great number of this year’s films focusing on the wide-eyed, foolhardy bravery of youth. Viewed in a certain light, Only the Young’s attractive cast, hip subculture, and sunny California setting, could work alongside MTV’s reality soaps. But you won’t find any typecasting here, no genre boxes, no preconceived notions of youth imposed upon the subjects—or at least none that the supremely articulate characters wouldn’t cop to on their own. For Garrison, Kevin and Skye (who, at 16, has an emotional intelligence that outdistances pretty much everyone I know), fashion is fun but not defining, religion is relevant but hardly central, and class is negotiated but not exactly transcended. Co-directors Elizabeth Mims and Jason Tippet are both in their early 20s, just a few years removed from the experiences of their subjects, this age proximity serves to repel intergenerational objectification as well as “state of the youth” sloganeering, freeing the filmmakers to make a movie out of what and how they see. They frame on-camera parries as deadpan two-shots, playfully score slow-mo skate-stunts to classic soul (because why the hell not), and never stoop to exclamation when ellipses work just fine.

The festival’s other youth-centric films similarly captured characters caught between intelligence and impulse, precociousness and spastic infantilism. They’re emotionally legible yet always unpredictable, from These Birds Walk’s violent but tender Pakitani runaways to the pragmatic and melancholic 11-year-old day labourers of The Argentinian Lesson, to the slapstick tenderness of hearing-impaired Giacaomo and his friend Stefana in Summer of Giacomo. These aren’t backward glances at childhood but stare-downs at an acutely unstable present. Though more observational than Only the Young, these films are no less ingeniously formed: These Birds Walk intertwines painfully recessive verité with an almost florid lyricism, and Summer of Giacomo matches Dardennes-like doggedness with durational rigour. The latter film makes the audience earn its proximity to the teen subjects, following behind as they wade through ankle-deep puddles en route to a secluded swimming hole, then watching from afar as they roughhouse, before finally arriving at a series of unguarded, splendidly troublesome close-ups.

But this year’s festival was ultimately defined by a two-film retro of Russian director Victor Kossakovsky, recipient of the fest’s annual True Vision Award. For those like myself who’d never seen it, watching the 60-minute, rarely-screened The Belovs (1993) was like discovering a lost history of the universe—or at least of documentary film. Imagine Grey Gardens (1975) set in Siberia, filmed by Sokurov, and staged by Tennessee Williams, and you’ll begin to have a sense of what Kossakovsky summons with his debut film, shot in the fledgling days of post-Soviet Russia and yet timeless in its inherently, gloriously Slavic insanity. The Belovs is so singularly destabilizing that you’re truly never certain if you’re watching a comedy or a tragedy, direct cinema or an art film, a day in the life or the end of days.

It was paired with the director’s most recent film, ¡Vivan Las Antipodas!, a vastly different—yet recognizably Kossakovskian—kind of marvel. Riffing on the concept of antipodes—diametrically opposite points on the globe, were a direct line drawn through the earth’s core—Kossakovsky selects four sets (eight locations in all) of land antipodes (which account for only 4% of the earth’s surface), and then simply goes to town (and country). He watches bridge toll-keepers in rural Argentina shoot the shit, then wades into thick Shanghai traffic; he cuts between the leathery hide of an African elephant to a Hawaiian island’s volcanic surface; between a Spanish rock formation and a beached whale in New Zealand; and between the grey and gold sheep-lands of Chile and Siberian. What might have been a nifty excuse to make a nature film is actually a work of cinematic rumination and surrealistic play. The frame is flipped and rotated, music bleeds from one end of the earth to another, and shots rhyme, contrast, provoke, and assert terrestrial complexity. It’s the world as seen, traversed and vivisected, by a wise and puckish poet. 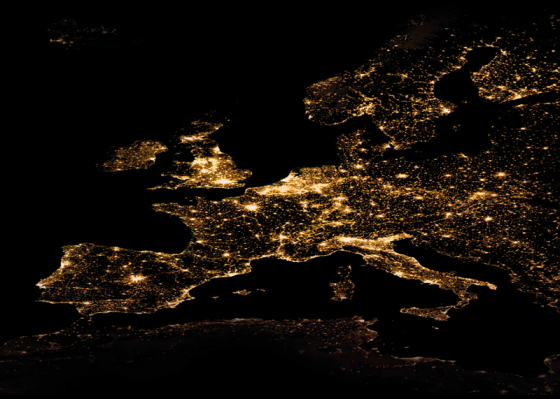 There’s nothing remotely like ¡Vivan Las Antipodas!, but Nikolaus Geyrhalter’s roving Abendland did make for an intriguing companion piece at the festival. Cinematically surveying Europe at night, Geyrhalter fluidly rotates through night patrols, newsrooms, emergency rooms, live sex chat rooms, suicide hotlines, and rave concerts. Though it’s largely comprised of surveillance-like establishing shots and methodical tracking shots, there’s commentary in Geyrhalter’s cuts and cluttered compositions, which over time seem less Kubrickian cool than Roy Anderssonian absurdist—especially when several thousand Oktoberfest drunks raise voices and steins for a German-translated Robbie Williams sing-along. As a portrait of Europe its sociologically incomplete but artistically sound, and the same could be said of Heidi Ewing and Rachel Grady’s Detropia, which summons a compelling city symphony out of just a few select, if undeniably charismatic, voices. Rather than try to depict (or explain) all that is and was Detroit, they go as deep and as wide as they can over the course of a single year, letting the noises of the present echo backwards into a tumultuous and tragic past, and forwards into an anxious future. Peter Nicks’ The Waiting Room tackles the health care crisis via a similarly limited canvas—a single chaotic emergency room in Oakland, California—but its institutional focus inadvertently tips the scales of sympathy away from the carousel of underfunded patients and towards the resilient and accomplished medical professionals. It works just fine as a drama of place, but not as the societal wake-up call it aspires to be.

Yet for all of its formally progressive and aesthetically ecumenical programming, True/False wouldn’t have the same ingratiating impact were it not for Columbia itself. The festival wasn’t imposed upon the town as some civic initiative, but developed organically out of the rising RagTag cinema—which has since become one of the best arthouses in the country—and in the spirit of the University of Missouri’s journalism program. All action of the festival takes place within the half dozen or so blocks between those two institutions, with screening rooms converted out of a symphony hall, a university lecture hall, a rock club, a hotel ballroom and a Methodist church, and with documentary film debates sharing time with Mizzou basketball watching at Booches Billiard Hall and Shakespeare’s Pizza. There’s True/False inspired parade, a 5-mile run, a costumed ball, a documentary-themed game show, and a rotating team of “buskers” that perform before every film screening. For four days a year few in Columbia need to be cajoled into seeing a documentary film, let alone a foreign documentary film, let alone a glacially-paced, plotless, often cacophonous foreign documentary film like Summer of Giacomo, bless its heart.

While Columbia is doubtlessly a special place, I’m not convinced this alchemy can’t happen elsewhere. If a multi-generational group of Missourians can sell out a screening of The Belovs, why, with some smart packaging and savvy salesmanship, couldn’t it fly elsewhere? Why not talk up ¡Vivan Las Antipodas! as like Babies (2010), but way better? It’s less about drinking the True/False Kool-Aid (which is of course quite delicious), than about realizing that in the right context, even good movies can find an audience.