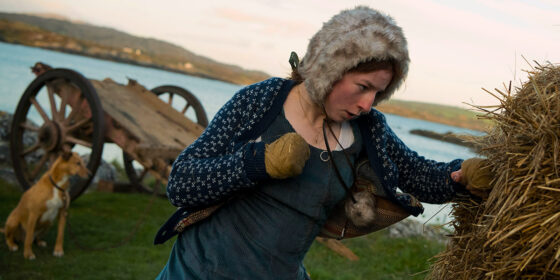 In Carmel Winters’ Float Like a Butterfly, a police altercation on the grounds of an Irish Traveller encampment culminates in the death of a young mother and the arrest of her husband. This tragedy inspires their daughter Frances’ (Hazel Doupe) dream to become a great fighter like Muhammad Ali. But unlike Ali, Frances’ means of navigating the world is to float with nary a sting. When her father returns from jail as a chauvinist drunk, she follows him wherever he goes, including on a quasi-road trip of debauchery and petty crimes. In him, the feisty Frances has found an undefeatable opponent, stubborn and despicable. But rather than see him crumble, Float Like a Butterfly has forgiveness and redemption in mind. It is this positioning that veers the film towards something more saccharine, sacrificing narrative precision and righteous indignation in the process.

Filmed with a drifting handheld camera, Float Like a Butterfly softens the reality that, for many women, family itself is a prison. Like Karyn Kusama’s Girlfight, Float Like a Butterfly zeroes in on the struggle between tough girls and their ignorant fathers. But where Michelle Rodriguez’s Diana in the Kusama film was unrelenting in her belief that her father would never change, in Float Like a Butterfly Winters accentuates the silver lining of every person with repetitive shots of shared smiles. A scene of Frances and her father singing together unfolds into a heavenly flashback of familial love as they inch towards mutual trust. But beneath the appearance of acceptance between the pair, it is impossible to forget the sexist jeering and the drunken beatings, and that, when Frances finally retaliates against her old man’s violence, her knee-jerk response is to apologize. Love, here, means always having to say you’re sorry, even for the wrongs of others.