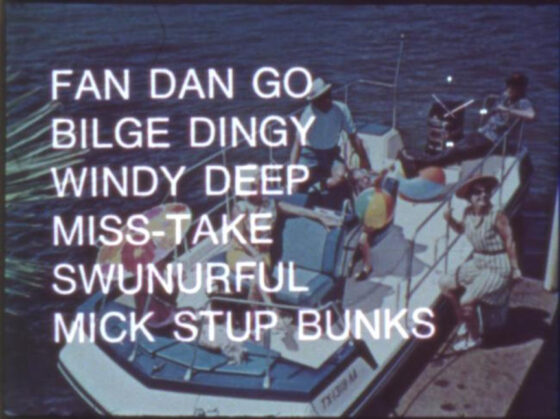 “Could be that all those venal mother-fuckers are us…if so let’s go easy on them.”

A funk-art, found-footage, intellectual brain-bait stoner comedy, epistemological jape, and audience-pleasing masterpiece of the American experimental cinema made in 1970, Robert Nelson’s Bleu Shut (30 Minutes) is exactly 30 minutes long. Hence the film’s full title, and the voice of the woman (our hostess, Diane Nelson) who, during the film, reassures the viewer that this will in fact be the case. Viewers of the film may note that the movie actually runs for about 33 minutes. There is a clock seen keeping time throughout the duration of the film, superimposed in the upper-right-hand corner over whatever else is going on onscreen, which may or may not aid the viewer in this observation. Life and movies are bound to time. Time is, you know…time. It binds all things, the stultifying metronome that regulates each mortal coil and sputtering star…at least until some experimental filmmaker sticks his hand in, starts messing with the hands of the clock, manhandling destiny, telling time to go fuck itself. The wind blows forward and, as Captain Beefheart reminded us in 1969, the wind blows back. The following year, Robert Nelson’s Bleu Shut, in exactly 30 minutes. Running time: 33 minutes. Someone is fucking with you.

Robert Nelson (d. 2012) was a comedian and formalist who made some of the most fondly remembered and often downright confounding movies of his generation. He was born in 1930 in San Francisco and studied painting there, at the California School of Fine Arts, and eventually at Mills College. He came to filmmaking in his 30s, starting with Plastic Haircut (1963), made (as a number of his films would be) in collaboration with the artist William T. Wiley and the composer Steve Reich. Mirth, metaphysics, and a well-lubricated good time seem to have been the prime production orders of the day. The widely seen minstrel show “provocation” Oh Dem Watermelons (1965) soon followed. Nelson was prolific, his films sometimes loose and whimsical, even as the contours of a carefully guiding hand slowly emerged. Bleu Shut is the grand, goofy summa of Nelson’s early work, a crypto-structuralist invocation of the multiple “planes” (as Nelson calls them) of duration at play within every movie/viewer interface, staged here in the terms of “a boat-game and entertainments.” Every minute, a buzzer will sound, a numeral will flash onscreen to count away the time elapsed, and a new question, always multiple choice, will be posed. Most of the questions will have to do with the names of boats. In a sense, the viewer is encouraged to play along with the voices of the Nelsons and Wiley heard within the film, guessing at the boat names and freely associating among the possibilities…until it becomes increasingly apparent that nothing makes sense at all, or that everything does.

That everything soon comes to include found snippets of Hollywood musicals lei-ed with Hawaiian dancers, glimpses of Garbo and Gary Cooper, the whispering inquisitors from Carl Dreyer’s The Passion of Joan of Arc (1928), some fisheye lens tomfoolery scored to a strumbly hippie drone, a couple of minutes of heavy thrusting from a stag film which almost certainly isn’t titled “The Pink Silk Abysm Befooled, by Robert Nelson,” and other delights. Franks and beans will be served shortly after the 11-minute mark. Finally, Robert Nelson himself appears, sort of. “What I want to do at this moment is tell you what this movie has been about,” he explains, as if in mid-lecture on the subject. Then he senses that there’s something wrong with his camera, an unwanted buzzing sound within. The 30th minute of Bleu Shut (30 Minutes) expires. The film continues. Fingers creep in and skew the hands of the clock. “Goddamn it, what the fuck’s the matter with the goddamned thing?” Nelson approaches the camera, blocks the image entirely. A found image of a fish in deep water appears. Is the movie over? In the upper-right-hand corner, someone’s flipping you the bird.