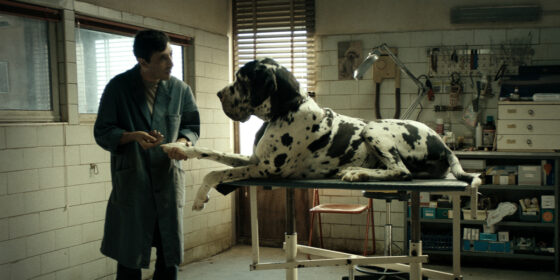 As Italo Calvino wrote, “The hell of the living is not something that will be, the hell of living is already here—it is a hell in which we live every day, which we create, being together.” In a laconic way, this quote captures the essence of the newest film by Matteo Garrone, which, after the baroque Tale of Tales (2015), returns to the southern side of the director’s cursed homeland for a modern, tragicomic Western.

Dogman (in Roman dialect, Er Canaro) was inspired by a real-life episode that was well-chronicled in the Italian media: a seemingly ordinary man who groomed dogs for a living one day decided to put down his tormentor, a local boxer. He imprisoned the boxer in a cage and then abused and tortured him for many long hours in various ways (even supposedly washing the victim’s brain with dog shampoo). Garrone was impressed by this takle of brutal revenge, but most of all he found in this story something that’s at the core of all his movies: the desperate need to maintain dignity in a world in which the law of the strongest governs, and the only solution seems to be violence.

As with Gomorrah, Dogman is characterized by an anthropological approach; Garrone is not interested in factual fidelity (the time and place of the action, the names of the characters, and the course of events have all been changed). By redefining the dichotomous categories of “victim” and “executioner,” Garrone creates an intriguing coming-of-fear story: intimidated and constantly humiliated, everyman Marcello (Cannes Best Actor winner Marcello Fonte) rises to the heights of his abilities (both physical and mental) and makes a breakthrough in his own life as well as in his surroundings, which have adopted violence in a silent and consensual manner. Dogman is primarily a mythical story about the “apocalypse of everyday life,” in which an inconspicuous Italian version of Buster Keaton becomes a saviour.