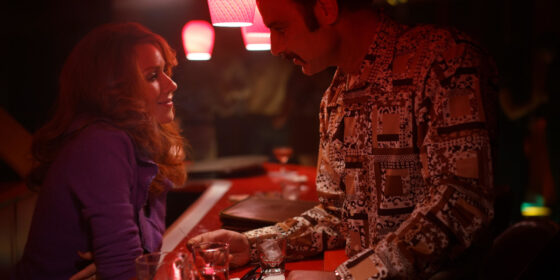 The showboating Apollo Creed in Rocky (1976) was clearly a (non-Muslim) version of Muhammad Ali, but who was the real-life Rocky Balboa? Whether you have always asked this question of yourself or not, here comes Philippe Falardeau’s The Bleeder to give you your answer regardless. Liev Schreiber is fantastic as Rocky’s real-life inspiration Chuck Wepner, looking most of the time more like a pimp wearing expensive furs than a serious sportsman. The character takes his punches in the ring and in his life; like a mix between Boris Karloff and Anthony Quinn from Requiem for a Heavyweight (1962), he looks as if he’s been beaten up even before he gets in the ring. He’s also a stubborn masochist: Wepner just couldn’t control himself when stardom came unexpectedly after his long and famous fight with Ali in 1972. The Bleeder is not as mythically-minded as Rocky; rather, it’s about how people lose and rebuild their identities, the consequences of fame and addiction to the limelight, and also how cool and trashy the 1970s were.

Falardeau is a smart filmmaker. The Canadian director enters the world of the film as an outsider and keeps an ironic distance that permits a sort of playfulness, in addition to intimacy. Wepner is not glorified, nor is he turned into a bleeding Christ. He’s aware of the fact that he might really end up a loser and decides to have fun along the way. He’s closer, maybe, to Bukowski than Hemingway, a John Huston Misfit reminiscent of that director’s Fat City (1972). The character’s emotional life is reinforced by a nice casting trick, in which Schreiber’s real-life wife Naomi Watts plays Wepner’s lover Linda. The chemistry between the two actors is natural and instinctive. To paraphrase Getrude Stein, a rose is a rose, and what you see is what you get. Falardeau’s vision is too modest to attempt the next Raging Bull, but even if it’s no undisputed victory The Bleeder (much like its protagonist during the Ali bout) stands proudly on its own (sometimes wobbly) feet.