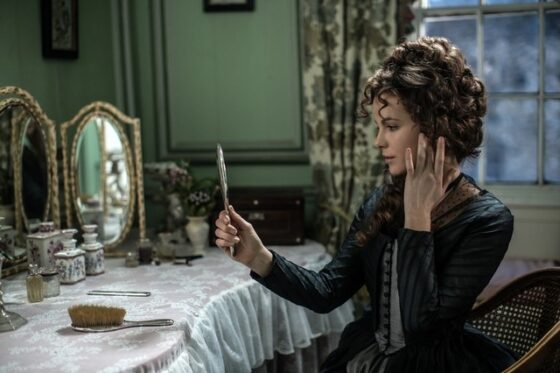 “Mansfield Park? You’ve got to be kidding! That’s a notoriously bad book,” asserts Tom Townsend (Edward Clements) in Whit Stillman’s Metropolitan (1990), moments before memorably declaring that he never reads novels, favouring “good literary criticism” instead (though he later relents by confessing to a mild enjoyment of Persuasion). That onscreen disparagement aside, Stillman’s devotion to Jane Austen was all too evident in his debut feature. As preoccupied with such issues as courtship, morality, and social decorum as they are with taffeta sleeves, bridge games, and conga lines, Stillman’s debutantes and their debonair escorts are Austenian figures set down in modern Manhattan. Documenting the exploits of yuppies abroad in Barcelona (1994) and the genteel debauchery of aspiring upper-class clubgoers in The Last Days of Disco (1998), Stillman further developed a contemporary corollary for Austen’s tales of genteel society from his memories of his own “haute urban bourgeois” upbringing, as he calls it in Metropolitan.

Twenty-five years and a mere four features later, Stillman eschews allusion and goes full Austen with Love & Friendship, an adaptation and expansion of one of the author’s least-known and most underappreciated works: Lady Susan, an epistolary novella believed to have been composed by a teenage Austen in 1794, and which remained unpublished until 1871. Given the resurgent wave of big- and small-screen Austen adaptations (as well as the nostalgia-tripping international success of Downton Abbey), one could see in this choice of project something of a commercial capitulation for a director who has long faced challenges financing his films: over a decade passed between The Last Days of Disco and Stillman’s next film Damsels in Distress (2011), which was released to mixed reviews and paltry box office. But by redubbing his version of an already obscure Austen item with the title of an even less familiar work—“Love & Friendship,” a fairy tale-like story contained within one of the author’s childhood notebooks—Stillman signals that his take on Austen will be less slavishly faithful than intriguingly hybridic. In eschewing canonical Austen and infusing his film with subtle textual entanglements, Stillman has finally achieved what he now seems to have always been working towards: the merging of his contemporary bourgeois comedies of errors with the literary precedents that inspired them.

Set at the tail end of the 18th century, Love & Friendship chronicles the assorted misdeeds of the calculating, newly widowed Lady Susan Vernon (Kate Beckinsale, reuniting with Stillman after her star turn in Disco nearly two decades ago), who has achieved renown as “the most accomplished flirt in all of England.” Penniless and tainted by scandal after her affair with the married Lord Manwaring (Lochlann O’Mearáin), Lady Susan retreats to Churchill, the country estate of her late husband’s family, where she sets about acquiring husbands for both herself and her daughter Frederica (Morfydd Clark). Possessed of little of her mother’s radiant beauty and none of her feminine wiles, Frederica is soon promised, against her wishes, to the befuddled Sir James Martin (Tom Bennett)—aptly described as “a bit of a rattle”—while Lady Susan reserves the considerably younger and rather naïve Reginald De Courcy (Xavier Samuel) for herself. Meanwhile, the cunning widow’s machinations unwittingly wreak havoc in the life of her sole female ally and obliging enabler Alicia Johnson (Chloë Sevigny), an American expat whose “respectable” husband (a sadly underutilized Stephen Fry) banishes her to Connecticut due to her association with such a non-conforming social deviant.

While Sevigny unfortunately flounders in her role, appearing visibly uncomfortable in period dress and elevated diction, her fellow Disco diva is resplendent in the lead. Beckinsale, returning to her Austenian roots after a lengthy sojourn in action franchises (she had previously starred in a 1996 British TV version of Emma, opposite Samantha Morton and Mark Strong), shines as the scheming Lady Susan. Whether matter-of-factly referring to Frederica as “the greatest simpleton on earth” or regretting that Alicia’s cantankerous husband is “too old to be governable, too young to die,” the actress’ deft delivery of a series of wittily withering insults makes her heroine’s merciless unkindness and mercenary manipulations utterly charming.

Witty repartee with a vintage flavour is, of course, a Stillman trademark. The magic and charm of Stillman’s first three films derived from their maker’s ability to seem both completely modern and strangely archaic at the exact same; looking back on the ’80s from the vantage of the ’90s, Stillman made his formative decade seem as distant as Austen’s long-vanished Georgian era. Though Love & Friendship marks the filmmaker’s first foray into adaptation after four original screenplays, he does not simply lean on the elegant language provided by his source—nor indeed could he, as Lady Susan is the rare Austen work devoid of dialogue, the story’s entire proceedings recounted through exchanges of letters. Accordingly, Stillman masterfully extracts, condenses, and manipulates the novella’s epistolary narration to craft quips that retain their Austenian origins while evincing a signature Stillman flair (as when Lady Susan dismisses the suffering of her lover’s wife with the blithe comment that “if she were going to be jealous, she shouldn’t have married such a charming man”).

Such is the stuff of all good adaptations, of course, but Stillman takes his authorial intervention a considerable step further. Where Damsels in Distress saw Stillman rather misguidedly attempting to adapt his sensibilities to the mode of the contemporary American indie—a mode that he had helped to create with Metropolitan but which has evolved without him—Love & Friendship feels more genuinely modern because it sees Stillman imaginatively filling out a framework left unfinished by the story’s original author. According to Stillman, Austen’s story and Lady Susan’s character in particular felt unfulfilled by the novel’s concluding act, especially in its representation of the consequences of the heroine’s misdemeanours. The charmingly narcissistic schemer Lady Susan is something of an anomaly in Austen’s oeuvre, and the author affords her considerably more respect and admiration than any other of the less-than-kind characters that populate her canonical works. While her adultery (for which she is utterly unrepentant) and her brazen manipulativeness should be unconscionable according to the moral laws of the Austen universe, Lady Susan is spared any punishment or acrimony (unlike the unfaithful Maria Bertram in the “notoriously bad” Mansfield Park, who is banished to the country for her misdeeds).

Picking up on the author’s exoneration of her unscrupulous heroine, in Love & Friendship Stillman has Austen’s adventuress double down on her treacherous impulses by duping a man into believing that he has fathered her unborn child—and this despite the fact that they have been married for a mere matter of days. This mischievous detour is both Stillman’s most pronounced act of textual embellishment and an organic outgrowth of the narrative and moral logic of Austen’s original. It casts Austen’s characters into the modern world by extrapolating the story’s spirit (if not its letter) beyond the boundaries of both the text, and the moral strictures of the era and society in which Austen wrote; and, to cap his act of textual transformation, Stillman has published a novelization of his own adaptation (with the cheeky subtitle “In Which Jane Austen’s Lady Susan Vernon is Entirely Vindicated”). In thus aligning Austen’s Lady Susan with our contemporary sensibilities absent any cheap pandering—there’s no (onscreen) coupling, blue language, or zombies to “sex up” the material for the modern cinematic marketplace—Stillman not only honours one of his greatest inspirations (in a recent interview, he declared that he “agrees with Austen on almost everything”), but crystallizes his own artistic sensibility. Love & Friendship offers fun with both Whit and Jane—an uncannily fitting fusion of two artists both mediums and centuries apart.

Posted in CS67, Currency, From The Magazine