Jason McBride/50 Best FIlmmakers Under 50, CS50, From The Magazine 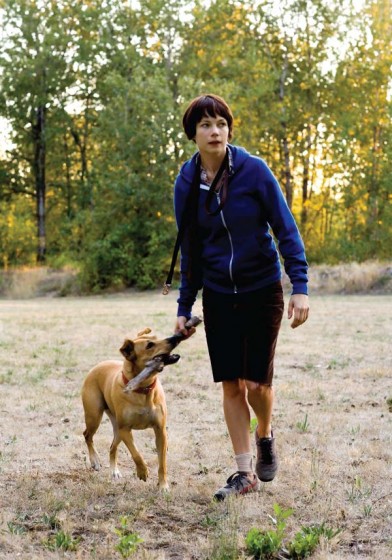 I’ve seen each of Kelly Reichardt’s feature films at least twice, but for some reason I can never really remember how they end. This despite the fact that they all end in roughly the same way: which is sort of not ending at all, with characters still in motion, heading somewhere, anywhere, their futures both assured and uncertain. Whether they take place in 19th-century Oregon or a noirish Floridian non-time, Reichardt’s films exist in a kind of perpetual present where possibility always persists even as it’s threatened, perverted, or temporarily snuffed out.

The subjects of Reichardt’s films, however, don’t immediately suggest such possibility; in fact, more often than not they suggest exactly the opposite. Her droll feature debut River of Grass (1994) depicts a couple so desperate to star in their own road movie that they go on the lam before they’re even able to commit a crime. Old Joy (2006), made more than a decade later, portrays two braided, and competitive, strains of masculine stasis: the rebel-without-a-cause and the midlife crisis. (The score by Yo La Tengo, both ominous and dreamy, constantly hints at the potential peril of each position.) In Wendy and Lucy (2008), the co-dependent relationship between a girl and her dog presages the desperate, desolate misery breaking out all over a recessionary America. The pioneering protagonists of Meek’s Cutoff (2010) are set adrift in the forbidding, desert landscape of the Oregon Trail circa 1845 (“We’re not lost, we’re finding our way,” says Bruce Greenwood’s eponymous frontiersman), but their real journeys—ethical, spiritual—take place largely within their private, silent souls.

All of these characters are escape artists in slow motion, with lockpicks that open their own hearts. Reichardt’s films are essays in the way that Anne Carson’s poems are essays, teaching us to look at real life more deeply, more imaginatively, more lyrically. Reichardt’s next film, Night Moves, to shoot this summer, is reportedly about a pair of environmental radicals—“eco-terrorists” in the military-industrial complex parlance—who attempt to blow up a dam. It’s easy to imagine the relentlessly empathetic Reichardt sharing some of the disaffected idealism that animates such activists. As misguided as their actions can sometimes seem, their rage against an industrial, earth-killing machine and the criminalization of dissent also insists that a different, better, world is possible.