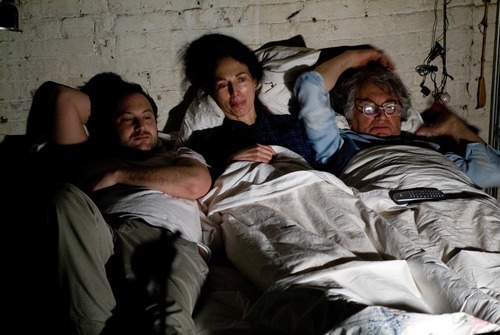 Many reviewers of Azazel Jacobs’ four features understandably place them in a direct lineage from his father Ken’s work. Both filmmakers are clearly preoccupied with interactions and crossovers between fiction and nonfiction—although the same could be said of everyone from Lumière, Méliès, and Porter to Costa, Hou, and Kiarostami. And both are remarkable directors of actors/performers, even though, in the case of Ken, projectors and found footage have performative roles along with people. The dialectics forged by opposite coasts and mindsets—corporate Hollywood vs. flaky New York Underground, claustrophobic obsession/fixation versus airy and uncontrollable street theatre—are equally constant.
Most reviewers are quick to point out that Azazel is more committed to narrative than his father. It’s easy to see what they mean, but some of their assumptions are worth questioning. If part of what we mean by “narrative” is plot and incident, there may be more of both contained in the intertitles of Ken’s The Whirled (1956-63) than there is in the main action of Azazel’s second feature The GoodTimes Kid (2005). If part of what we mean is “character,” then the work of both filmmakers is overflowing with it, from Jack Smith’s manic cavorting in many of Ken’s films to Diaz’s exhilarating dance in The GoodTimes Kid, not to mention John C. Reilly and Jacob Wysocki in Terri (2011). And if part of what we mean is “action,” that surely includes what a filmmaker does—as in the editing of both Azazel’s debut feature Nobody Needs to Know (2003) and Ken’s The Doctor’s Dream (1978).

One of the curses of American life is the lack of viable incentives for “growing up,” and both Jacobs père and fils are preoccupied with this dilemma; so it’s logical that paralysis of one sort or another figures in all four of Azazel’s features. Part of this could be viewed as non-narrative impulses within ostensibly narrative films—though in Momma’s Man (2008), it’s not so much non-narrative as a kind of mysterious narrative that refuses to budge, even when it’s bursting with the sheer presence of Ken and Flo Jacobs, “found” objects par excellence. For them as for others in the cross-generational Jacobs universe, being becomes a celebratory form of doing.